I just got a StudioLive 24.4.2 AI console and PA system and am so exited about it I had to share what the "AI" is all about. Check it out.
What a cool system.

I've actually used this desk a few times; mixing for a local club that purchased one to replace an old Behringer EuroDesk on their house system.

From what I experienced, it's a very powerful console, loaded with features, incredibly reactive, and worth every penny... which really isn't all that much if you look at what this desk offers. And, I like XMAX pre's. I like that they are beefy - but also very transparent.

I've also been on the other end of that board as well - as a performer - playing a local theater that uses one for their FOH; the last time I performed there in the band that I'm in, each guy in the band was able to set up his own individual monitor mix, standing at their own mic, using our iPads.

FOH always sounds great in that venue. (Although it's also a great sounding room, and, they also have a very good FOH engineer, which as we all know can make all the difference in the world... ;) )

But yes...Technology is amazing. The things we are able to do today weren't even dreamed about when we were younger.

It's funny to think about this all in contrast, back 40 years ago or so, when I was in a neighborhood garage band, ( Franco American and the Spaghetti-o's, circa 1972, ) and we thought we were serious bad-asses because we had a Shure Vocal-Master system- with not just one, but two columns per side, and one Community 10" monitor wedge on the center mic.

The VM had built-in spring reverb, and sometimes it wouldn't always work, so you had to bang on the top of the mixer to shake the spring loose... and when we did, you'd hear a gigantic "BOINGSPLOOSH" sound that we thought was really bitchin'. LOL

What speaker configuration did you get? 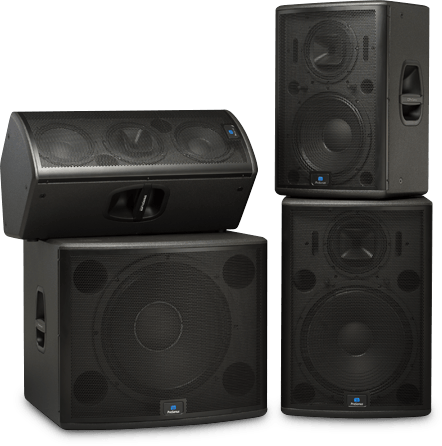 The local theater that I mentioned in my post above is shown below....this is the Akron Civic Theater, and I'm almost positive that the speakers you posted are the ones that they use for stage/ side fills, with the one speaker mounted on a pole above the sub on each side of the stage....and they sound fantastic.
(They also have wedges and an in-ear system, we've used the wedges in the past, but in recent shows have changed to in-ears.) 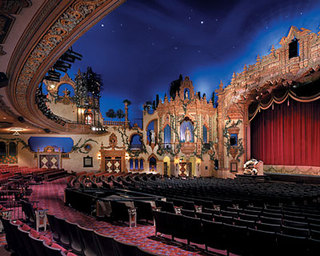 When the band I work with plays there, these arrays you've shown in your post above are on either side of the stage pointing towards us... and it's like listening to ourselves through a well-tuned PA system.
Hands down, the nicest sounding side-fills I've ever heard.

(On a side note, I have no idea what they are using for FOH.)

Wow, what a beautiful theatre. Ya, these are like studio monitors on steroids! Man, would I have had fun with this technology 20 years ago.