Last Christmas I recorded a grand piano+ mezzo soprano+soprano. I used a ldc mic (Austrian audio 818) and a zoom f6 32bit float. Unfortunately it sounded bad. There was a nasty distortion in the higher frequencies at some moments both the vocals came in. The mic did not clip and was put about 3m from the vocals. In fact the on camera mic (sdc stereo mic) was ok and saved the day. In the past I did some nice recording with this mic and a classical tenor.( I tested the mic afterwards and it is fine) Would a Schoeps mk40 or mk41 be a better option? So has anybody ever noticed this strange distortion with a large diaphragm condenser?

Curious… What are you using…

Curious… What are you using for a preamp and converter?

Sorry, I see you are…

Sorry, I see you are tracking to a zoom f6 which I'm not familiar with. Looks like a really slick unit! Portable 👍🏼

It could lack headroom so tracking at lower levels might improve the sound quite a bit! I don't think I would track an operatic voice with an SDC. Have you tried an outboard opto compressor like an LA-2A in front . It would sound glorious!.

While recording audio I have…

In reply to Sorry, I see you are… by audiokid

While recording audio I have to operate a camera , therefore I use a 32 bit float recorder so the audiosignal won't clip. And that's why I was surprized to find this strange distortion, with plenty of headroom. Maybe the combination of these two vocals and a grandpiano playing pretty loud caused a kind of flutter in the mic I suppose. I have to admit that during the recording my ears felt to be under severe attack.

Can you upload an example of…

Hey Rudy, can you upload an example of this?

In reply to Can you upload an example of… by audiokid

on my nearfield monitor speakers this really sounds bad, or is it just me? 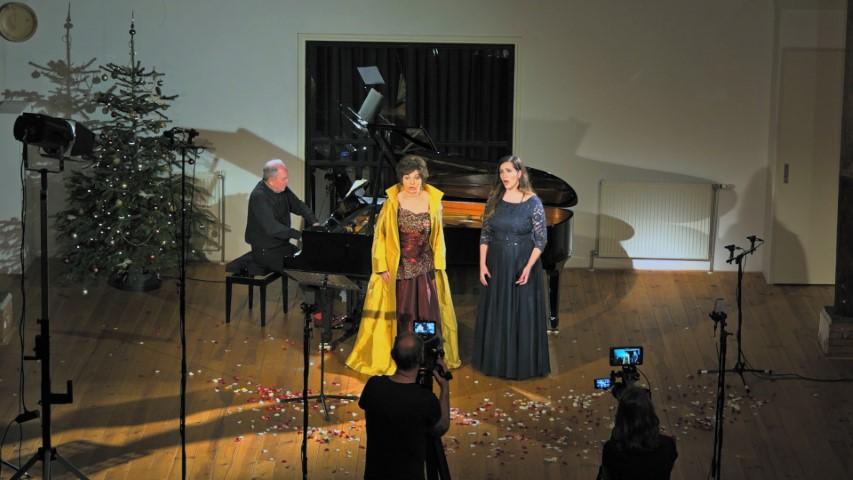 In reply to Can you upload an example of… by audiokid

Your wave looks good and the…

Your wave looks good and the overall sound isn't bad but there is a slight distortion (5 sec mark), which to me sounds like converter clip (gain staging) issue. 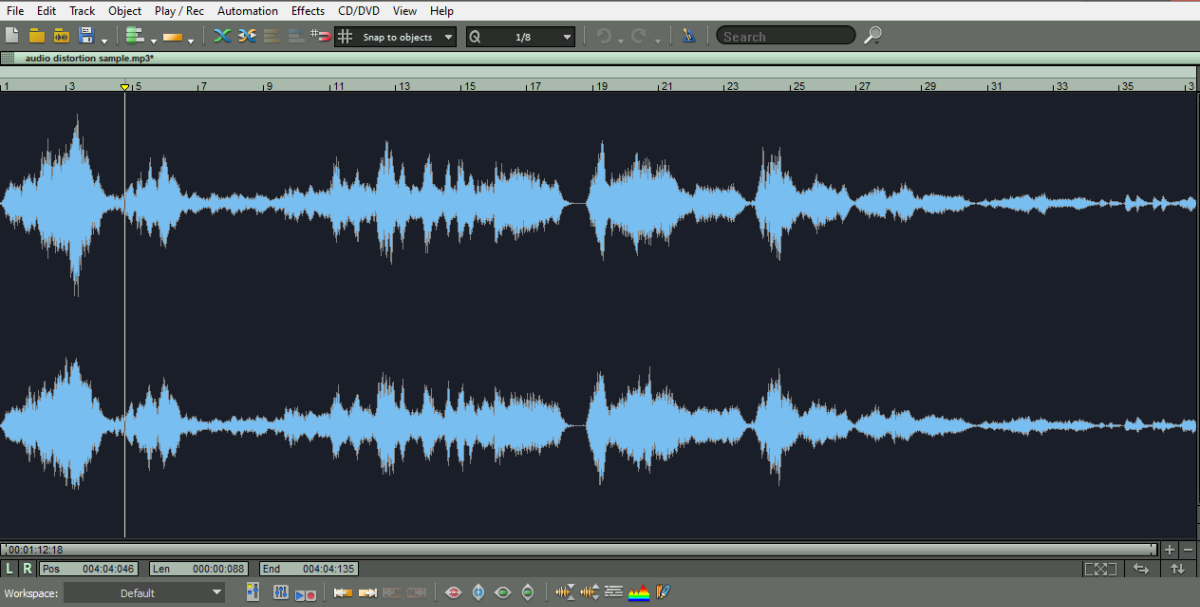 Depending on the ad converter (good better best), most sound better when the input levels are lower than optimal. Next time try tracking 3 to 6 db lower.

Did you record this with the input limiter active?

In reply to Tracking with input limiter active? by audiokid

It was recorded in 32 bit float with no limiter active on a Zoom f6. For safety reasons I used one of my Zoom f8n recorders parallel to the f6, the audiofiles sounded likewise.
Next month I'll do another live recording in the same venue. There will be an actor telling a story , a grand piano playing and a mezzo soprano singing. I think I will close-mic the piano and put a wireless lav on the actor to be save, because he will move around on stage but for the mezzo soprano I'm not sure yet. I hope she will not stand this close to the piano with the lid open.

A couple of points...

I'm a little bit worried about a couple of the things you have said concerning this recording.

For safety reasons I used one of my Zoom f8n recorders parallel to the f6, the audiofiles sounded likewise.

Exactly how did you connect the recorders in parallel? How did you arrange the supply of 48V phantom power to the microphone?

The second point was that I think you may have read a little too much into the "32-bit float" specification. The F6 has two 24-bit fixed-point converters per channel, both fed with the same analogue signal but at different levels, and hence different sensitivities. There is a clever algorithm that sorts out how much of each converter is combined and sent to the storage and output system. This gives an effective dynamic range that is greater than that which a single 24-bit value can represent. The solution they adopted to get over this was a floating-point format, but this is used only for storing the data.

I used a signal splitter …

In reply to A couple of points... by Boswell

I used a signal splitter and powered the mic by the 48v phantom of the f6. 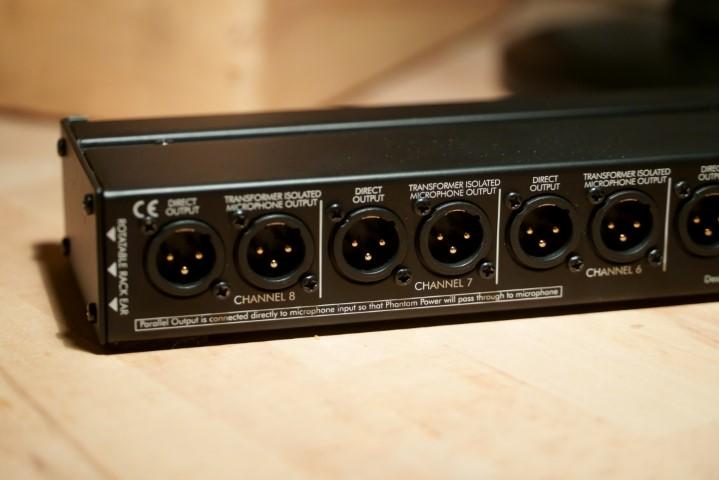 I’m thinking maybe your mic was the culprit. I don’t know that one but on the 414 AKGs I rather like for this kind of material, I would have the pad in on at least 10dB.

I’m also using again SDCs when a singer loved the sound but hated the look of the 414 when it crept in shot, so I’ve brought out of retirement a pair of AKG451s with extension tubes and these sound very similar, but are much more video friendly. I’m also using the pair with the tubes today on a grand piano recording where the visuals are important. My choice between large or small is usually down to how the mic will do the job. I’m not certain they find opera singers easy. A point source, with substantial volume and plenty of transients. A bit like a trumpet. All that level from one place can make odd noises when the diaphragm is at right angles to the source. A slight tip up or down seems to warm those up, maybe it was a similar accidental collection of things conspiring against you?

Just a thought - in the…

Just a thought - in the picture there are quite a few other microphones - what did they capture at the same point? Considering the closeness of the pair to the piano, the pair I assume you intended as piano mics would have captured the singers as would the ones on the tall stand near the light, to the left.I've listened carefull again in a different studio and I think I'm just hearing the mics struggling with the level, so the distortion (if you didn't pop a pad in) is pre-everything. What were those other mics actually doing.

The singers are in exactly the place I would have put the piano mics. If you put all your sound sources in the same place - maybe just an elevated co-incident pair would have been better? The room looks like it sounds - hard. If I was doing this recording space with those people and it was being video recorded, then I suspect I would have recorded a closer perspective and probably separated the piano and singers by at least 2m, and the singers from each other by the same amount, and then close miked the piano so you have control, and tweaked it in the studio. It strikes me as a room that probably will never sound quite right - so minimise the usual distance you'd use to advantage in say, a church or concert venue. Get it captured with isolation and definition and fiddle the ambience to suit.

I recently recorded in the…

I recently recorded in the same space, the same piano (lid closed this time) with a pair of octava's mk012 omni + a pair of Line Audio Om1 and it sounded  a lot nicer. For the vocals I used a Schoeps cmc1 mk41.( +2  414 xls as room mics) As the performers moved a lot on stage it was a bit hard to get a consistent audio level but nevertheless the sdc mics did a good job. Next time I think I'll go for these in this venue: