So, I played tourist the other day, and visited some local spots with my girlfriend, kind of a "rainy day" thing...

At one point, we visited Severance Hall in Cleveland, the home of The Cleveland Orchestra: 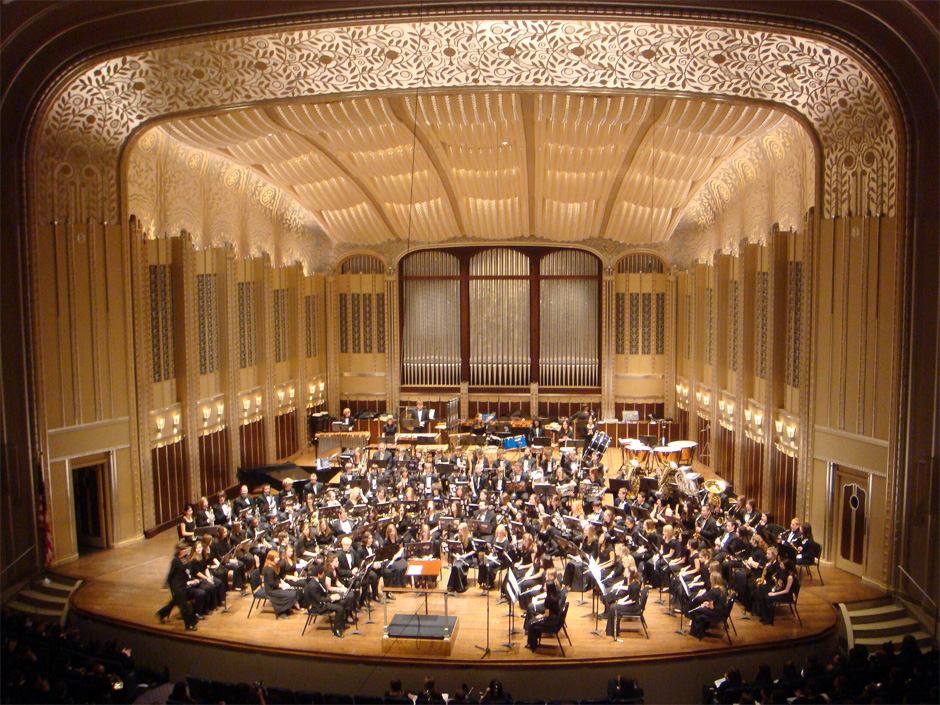 Being in this very old, beautiful - and fantastic sounding concert hall, got me to thinking about how I might go about creating my own reverberation impulse files; files that I could load into any standard/accepted convolution shell.. (Pristine Space, Samplitude Room Sim, LiquidSonics, SARM's Altiverb, etc.)

A little research has shown me that while many of these files start (and end) solely as code - as mathematical Equations alone - that the source of quite a few of the other popular existing reverb impulse files are sourced in actual real time recording of reverberation. Often, a starter pistol is used to create the reflection, and occasionally, claps and even vocal shouts.

So... is it possible ?.... meaning if I could get permission to set up some microphones in a place like Severance Hall, and create several different impulse files, as .wav files? Does anyone know what the followup steps would be to create an impulse file that is 'playable" on any standard reverb convolution program? How would I go about the mathematical recreation of the reverb so that I could "replicate" the sonic character of a particular space? Is there an industry accepted editing program for this calculation?

If I can figure out how to do this, I'd be more than happy to share these files with those here who use convolution reverb as part of their mixing technique. :)

Or, do you think that this is this too difficult to do?

So... is it possible ?.... meaning if I could get permission to set up some microphones in a place like Severance Hall, and create several different impulse files, as .wav files?

It’s definitely possible, and an exciting idea if you have access to such a beautiful facility.

I haven’t a lick of practical experience here, but since nobody’s responded yet I can chime in on convolution. I still have nightmares of doing convolution by hand in DSP class. I don’t recommend it, but luckily there's software to take care of that. Basically the idea is to take the frequency response of one acoustic environment and transpose it to another. This is done by applying an impulse to the room, and measuring how the room responds. An impulse contains all frequencies, which is why it is useful to completely simulate how a room sounds. At least in theory. Since true impulses are hard to come by, a pistol seems to be suitably close.

I’m not familiar with what file formats convolution algorithms accept as inputs, but I imagine they can generate an impulse response from a WAV file or something derived from one. Or at least there are programs to do so.

Hopefully someone with more knowledge in this area can chime in.

I imagine the real fun here lies in placement, both of the impulse and of the measurement mic.

Do you have any measurement mics?

LOL... I suppose it's poetic justice that you're the one telling me to do this Rev, after I was the one who told you I wasn't able to accept your excuses of not building an 1176... so yes, touche, my friend.

This may be more trouble than it's worth from a practical sense, being that there are already so many very nice impulse files out there already.

I suppose at this point it would be more of a learning experience for me, another bit of knowledge to tuck into my cap.

I don't have any measurement mics myself, but I have access to a few - a colleague of mine (who is also a friend) has several Earthworks Mics that I'm sure he would allow me to use.

You mentioned software... can you point me in a direction for that?

From the abandonware Adobe audition 2.0 manual, an old favorite of mine and way ahead of its time in terms of processing quality

"
Convolution is the effect of multiplying every sample in one wave or impulse by the samples that are contained within another waveform. In a sense, this feature uses one waveform to “model” the sound of another waveform. The result can be that of filtering, echoing, phase shifting, or any combination of these effects. That is, any filtered version of a waveform can be echoed at any delay, any number of times.

For example, “convolving” someone saying “Hey” with a drum track (short full spectrum sounds such as snares work best) will result in the drums saying “Hey” each time they are hit. You can build impulses from scratch by specifying how to filter the audio and the delay at which it should be echoed, or by copying audio directly from a waveform.

With the proper impulses, any reverberant space can be simulated. For example, if you have an impulse of your favorite cathedral, and convolute it with any mono audio (left and right channels the same) then the result would sound as if that audio were played in that cathedral. You can generate an impulse like this by going to the cathedral in question, standing in the spot where you would like the audio to appear it is coming from, and generating a loud impulsive noise, like a “snap” or loud “click”. You can make a stereo recording of this “click” from any location within the cathedral. If you used this recording as an impulse, then convolution with it will sound as if the listener were in the exact position of the recording equipment, and the audio being convoluted were at the location of the “click”.

If there are several ticks, descending in amplitude over time, such as one tick every 100 milliseconds, and half as loud as the previous tick, then the result of convolution with some audio will be that sound echoed with 100ms between each echo, and each echo at half the volume of the previous echo.

Note: To send any portion of unprocessed “dry” signal back out, simply add a full spectrum echo at 0 milliseconds. The Left and Right volume percentages will be the resulting volume of the dry signal in the left and right channels.

Another interesting use for convolution is to generate an infinite sustained sound of anything. For example, one singing

“aaaaaah” for one second could be turned into thousands of people singing “aaaaaah” for any length of time by using some dynamically expanded white noise.

To get a feel for Convolution, load up and play with some of the sample Impulse files (.imp) that come with Adobe

Audition. You can find them in the /IMPS folder inside of the folder where you have installed Adobe Audition, or on the Adobe Audition CD.

That's what you get for being encouraging, Donny. One good turn... or something like that? It's good. I'd been living too comfortably, and that's not good for anybody. BTW, I put together the chassis and power section of the 1176 last weekend. Build's going slowly, but well so far.

On to software. Are you using Samplitude's Room Simulator as your convolution engine? It looks like it accepts WAVs as input, so it should be fairly straightforward on the software side. As mentioned in kmetal's comment, convolution is dependent on sample rate. If you consistently work at one sample rate, collecting your impulse response at that rate would keep things simple. If you work at more than one, an impulse collected at your highest sample rate could probably be downsampled without issue. Then again, using mismatched rates could lead to some whacked out effects.

Good luck if you decide to do this!

I'm not sure if this is still on your radar, Donny, but I thought I'd post in case it is.

I purchased a well-known plugin bundle over Black Friday, which includes a convolution reverb. I don't mean to hock their wares, but I was surprised to see the manual for it links to a paper on the methodology they used in creating their samples:

It's pretty technical, but interesting.

The manual itself has less technical general tips for sampling:

I don't think that I'm really smart enough to understand the technical details of convolution, though.

It intrigues me a lot... I just have to figure out how best to understand the primary specifics of the science.. ;)