How is this punk mix?

First thing I would do is not have it clip almost continuously.

First thing I would do is not have it clip almost continuously. The intersample peaking hit 1.2dB over 0dBFS. Part of that is likely conversion to MP3, but the mix is too hot on the LUFS scale and needs some headroom below 0dBFS so when it's converted to MP3 it doesn't clip.

The vocals are so buried they almost might as well not be there. Maybe it's a stylistic choice, but I think it's too far in that direction.

What software do you use?

not bad man, needs some work to be a final imho. the guitars sou

not bad man, needs some work to be a final imho. the guitars sound good. i think the drums need a little more, something going on. id experiment with a couple barely audible delays (1/8 or 1/16th notes, maybe dotted 1/8th on one side 1/8th on the other) and/or a small room reverb with some pre-delay. the vocals an effect like waves doubler (+6 cents on one side -6cents on the other) or a light chorusing. keep in mind you'll likely have d-ess the vocal double/harmony to avoid buildup of ssss and hard consonants.

for reference check out this new song, (which i bought the other night on bandcamp), it seems relevant to your mix as far as drum sound, and the vocal level which is slightly buried (on both tracks). the drum ambience might be a bit much for your tastes, but the idea is that there is a relatively flat muffled snare sound upfront, with something interesting accompanying it. the .WAV file has more apparent vocal harmonizing effects, and drum ambience. im not talking about the backup vocals, which are cool, and maybe something you'd incorporate, but i mean the harmonizing/doubler type effect on the lead vocals. its subtle, but often the art of mixing requires subtly, something im personally still catching the hang of. also notice the vocals have some "special effects" that show up, and then leave, as well. theres a constant motion to that, which help propell interest and momentum in the track.

you may want to try out some different master bus/mastering pluggins. slates is good for rock and roll, ozone an fabfilter limiters are good in general.

Nice energy I like it. As for the mix. It's a bit heavy on the

Nice energy I like it.
As for the mix. It's a bit heavy on the lowmids and missing definition in the highs (may due to the conversion)
I would lower the area between 60hz to 180hz.
I agree with the others, it's too hot and the vocals can be a bit more upfront. On your master buss, try slower attack on the compressor and lower ratio. Loud is impressive but it destroys the life and dynamics of the song...
Also, the bass drum has nice lows but it needs some beef in the uper mids so it doesn't get lost in the mix. Same story for the toms.
I'm guessing the representations of the low frequencies is not accurate in the room your working or from the listening device.

I get it, your bass track is so loud that it engages the compres

I get it, your bass track is so loud that it engages the compression on the full mix too much. It's all find before the bass enters the mix.
Could you post an un compressed version.. remove everything on the master buss... we'll start from there.. ;)

or put a hi pass on the 2 buss comp

or put a hi pass on the 2 buss comp

Yeah, that's what I expected.. your bass track is too loud and i

Yeah, that's what I expected.. your bass track is too loud and it screws the compressor behaviour. You see compressors reacts to low frequencies more aggressively. So when the bass dominates the mix, it also makes the compression work harder than it should on a masterbuss.
Of course I talk about a compressor but it goes the same with limiters..
One thing that can be done is make the compressor reacts to only upper frequencies many plugins have sidechains options to do so.
Here is an image of what I'm talking about, this plug as an EQ curve to craft the compressor's detection (at the bottom): 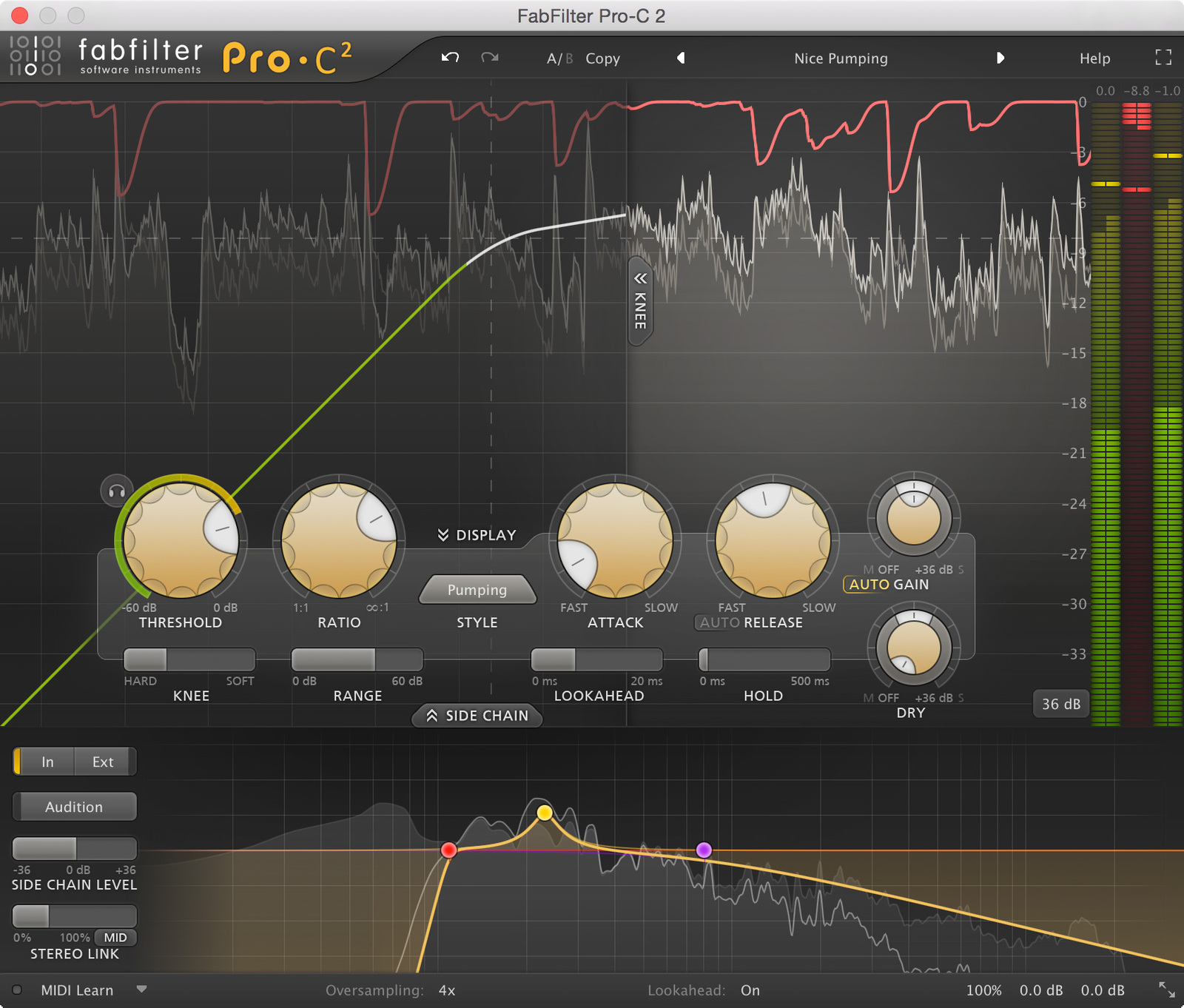 Making the compressor less sensitive to the bass is a useful approach, but I think the problem is more in the direction of the overall frequency balance of the track. I suspect it's a monitoring problem that keeps you from hearing the mix properly and so you compensate for what you're not hearing by putting too much of certain frequencies into the mix.

Actually it sounds pretty good but the bass is still rumbling. T

Actually it sounds pretty good but the bass is still rumbling. There is so much low end on it you could get away with the volume in the mix being extremely low. The other option would be to keep the volume and low pass the bass until most of that low end is gone.