I'm interested in the DI/Reamping options that are out there for studio recording. The Jd7 seems to do it all with a 1k asking price. The alternative is about $700 bucks and would comprise of an a/b for the two guitars into a direct box and an amp splitter for live tracking. Then a reamamp box into the amp splitter for re amping.

Chances are I would a/b the live guitars and re amp as well for foot control.

My concern is signal loss through all those aby switches, and the 3 way switch to the amp should probably be a purpose built one with transformers instead of the Morley, but it's to demonstrate the basic idea for now.

The jd7 is almost perfect but I like its design features and the fact that it's all in one box. It's not cheap, but it also powers 6-7 amps,
Which gives me to grow, and makes it not relatively expensive. My basic plan is Mesa or deisel Einstein, Marshall, and amp sI'm computer. Then I'll expand as funds allow.

The only downsides to the JD7 is you have to unplug the second guitar for the front push button to alternate between the re amp and guitar 1 signals being sent to the amp. The other downside is it's a push button not a foot switch.

-however- in the manual for the jd7 someone asks if you can use a footswitch to control the jd7. It replies:

"A: We do not provide a foot switch however you can connect the JD•7 to a custom switching system and it will work fine. I am sure that the Radial Design Team will one day produce a foot controllable system for live use. "

I really like the idea of having some sort of remote control ability for it since any analog gain jobs will generally be set and forget, and the rack might be in another room. How cool would a mod be that was taken from like a wifi light satin or something like that?

That said my monitors power amps that are currently place holding have a memory so I can store refernce and entertainment modes as well as a couple routing schemes, are digital push buttons not iPad controllable. 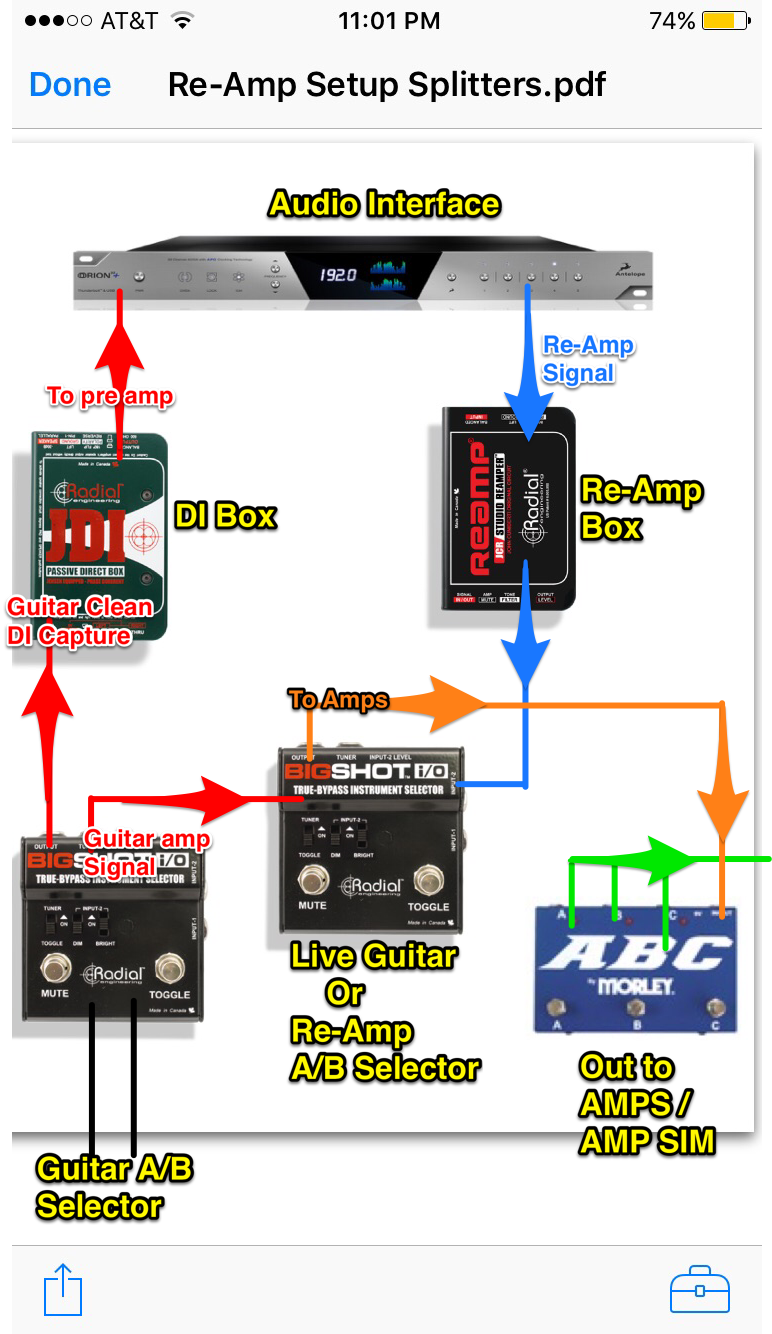 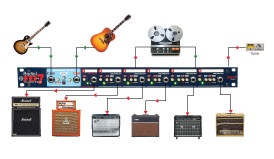 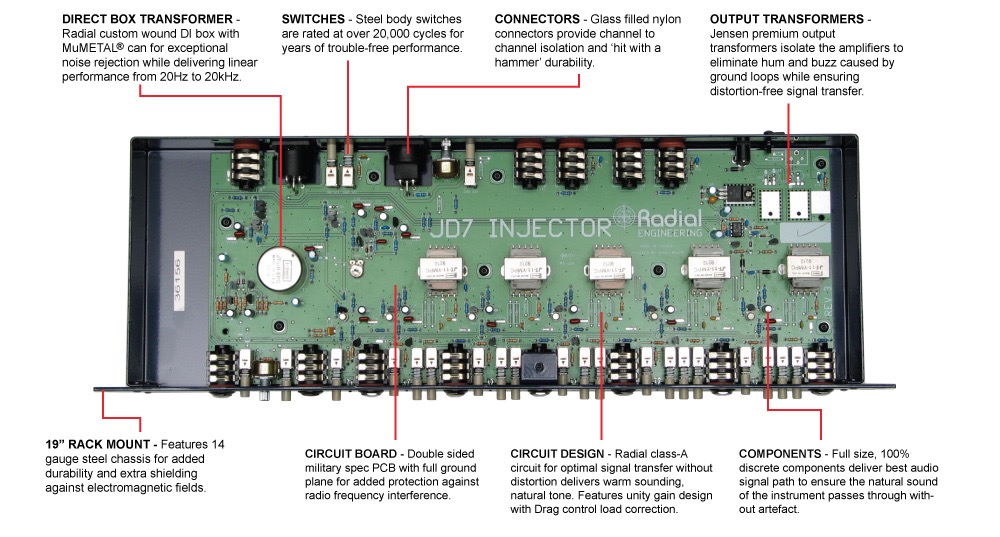 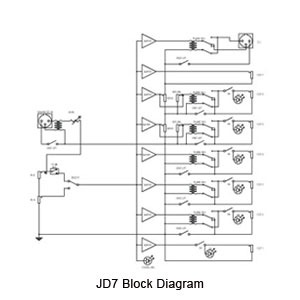 kmetal Tue, 08/02/2016 - 00:38
I've heard these otherwise unintelligible phone made diagrams are easier to understand when a woman with large breasts is included. There's always next time...

kmetal, post: 440312, member: 37533 wrote: I've heard these otherwise unintelligible phone made diagrams are easier to understand when a woman with large breasts is included. There's always next time...

I was only making light of how hard it was for my tiny brain to follow...it was chinese to me (for those that hadn't bothered to translate 中国给我 via google, its basically what it means...in chinese). ;)

Although it looks like you have it all mapped out...I can see where you are going with this but at first read it was a little mind boggling for me to keep up.

For shure Sean I was just playing around. Lol it's not particula

kmetal Tue, 08/02/2016 - 01:08
For shure Sean I was just playing around. Lol it's not particularly well mapped. It probably took me like two hours at least just thinking about it the other night. I wasn't offended, purely in agreement.

It hopefully is enough to get the point across. The main concern is radial states a 3db loss when you use a y cable. Which is basically why they use transformers when they split the signal. So I'm wondering what the effects of all those ab and aby pedals are. Mainly becuase the ab pedals select input source to the amp, either the guitar or the re amp signal, and send it to the amps. So I'm wondering if that is incurring any sort of degradation. The only real 'split' is the aby to the amp.

But yeah dude not simple. I think probably unessesarily complex.

Especially when the radial is one Rack Unit.

I enjoyed your response. Lmao

So, this may be a silly question, but is it a scenario where you

If so, does the pedal allow for A & B selection simultaniously or just A/B?

I imagine capturing both the DI and the amp/ amp sim together is the plan?

Is there some sort of round trip latency to take into account?...how does it allow for both the DI and amp sim to be captured in time?, is this due to having the seperate laptop running the amp sim as a stand alone to compensate for this?

thats a good question, and a big part of why it took so much tho

kmetal Tue, 08/02/2016 - 17:04
thats a good question, and a big part of why it took so much thought. This diagram /setup is for the big setup not the laptop but the same privileges apply.

Yes the DI (clean for re amp) and the amps and amp sim all would be recorded at once. Leaving the actual re amping for a seperate stage.

To eliminate latency I needed to keep the conversions down to one only, no round trip.

So the DI and physical amps are typical fare. Now the question is the amp sim. And there are two options

a seperate interface for the amp sim computer that sends a digital signal out to the main interface. The amp sim would simply run in standalone mode.

A preamp with digital outs sending a digital signal to the amp sim computer with the amp sim being hosted by Vsl pro player. This would
be linked to the computer via Ethernet and play back in sync w the vsti computer also linked via Ethernet and vsl pro. Which is where the drum and strings and keys will be played from until turned to audio tracks.

id likely be monitoring off the vsti amp sim track/computer not the multi track audio computer. Similar to how UAD dsp mixer infesting works, or dsp in general.

So basically in case two, since the DI and DI to amp sim is being convertered by the pre amp (ISA 828) there is no latency/sync issues between the two becuase they are converted at the same exact point.

Since I'm not monitoring the clean DI ever, it's simply a tool for re amping or to send to an amp sim pluggin, the concern of latency involved w the amp sim and Ethernet network isn't a problem. I'm only listening to the DI signal as a processed amp sim sound. This is captured in realtime by the multi track computer. All the latency and compensation is handled by the vsl player which is hosting the drums Ect, so I'm 'playing to' tracks that are all sync'd, becuase there all subject to the same Ethernet / vsl players latency.

The actual physical amps are recorded in typical fashion and are subject to the converters latency only. So if VSL player doesn't automatically account for this (which I think it does) then I'd have to make some adjustments.

But in theory, I understand it, which I could be wrong, they account for this. It would be no different than me playing electric guitar along w vsl orchestra stuff hosted on a seperate computer which is common, and what it's designed to do.

-What's cool about the Orion is the digital ins and outs can be used seperately from the lines so even though I can only record 32x32 tracks to the multitrack, any combo of digi or analog, I can use the digital io to stream additional tracks/sources elsewhere, like a digital headphone amp, amp sim computer, another room, Ect. That actually is what put the final nail in the Orion as the coverter choice placeholder for this bigger setup.-

Sorry I think I made it worse trying to explain it.

The conversion latency is all the same because there is no round tripping, just one conversion right at the DI and Mics.

Network latency is in addition to the conversion latency (2ms roughly) but is handled by the software pluggin compensation and own latency management. This keep everything in sync.

Again, I think. I'm not completely sure, hopefully I can verify this somehow.

This is why I'm doing a 2 cpu mini/budget version of this w the laptop /mini PC rig. I need to make sure the interconnections and hosting is gonna work right before I'm investing heavily.

This also means that I may not be able to use the waves gtr3 in realtime becuase of sample rate limitations. I'd have to send run it in standalone mode and capture it as analog.

But really im not super sure how gtr3 plays into the big rig as far as realtime capability.

For the laptop, it's a matter of just recording the analog outs from the sim computer. Into the analog ins of the laptop. This means two conversions of the dry guitar signal before it hits 'tape'. Not a huge deal for demo.

When I switch to guitar rig and the digital outs, the multitrack (laptop) gets the DI and amp sim signal via digital ins, and only converts the one time.

Sorry this is even more confusing. I'll try and make it worse by drawing a diagram of the mobile setup. :) probably tonight.

I'm still unsure if all this aby is gonna degrade the signal. Really for $300 I might have to bite the bullet me plannon the jD7 and figure out a footswich to toggle between live guitar and re amp. I'll tag boz if he doesn't catch this thread.

The whole computer / network latency is another worm can lmao.

This is really why I'm seperating the tasks into various computers, becuase all the buffers need to be so low for good response times.

As is it's about 1.5 ms conversion latency (round trip) for thunderbolt, and about 2ms latency for pluggin/vsti hosting via Ethernet and other computers.

That's 3.5 ms for live tracking at minimum buffers in an ideal case. That's way way faster than my FireWire interfaces 12ms rating and 128-256 buffer setting in PT, which is where I left off a few years ago.


No, I think I understand it a little better.

Like anything in this game Kyle, its all trial and error, and thats how we improve and learn and discover new ways of doing things. Kudos to you for doing so.

Thanks man. I'm pretty excited! My Mesa cab is under agreement f

So my money is starting to come together for the mobile setup and my plans for the big one are narrowing to the point where it's getting close to time to start planning a trip to try some of it.

There's some accounting and bank meetings setup at the end of the month for the big setup and basement studio build too!

Check it out. This dude is basically doing what I'm saying using

Plus he me running at 32 samples buffer while hosting vsl/omnishere from within his multitrack. I'm planning a seperate cpu for vsl/vsti's. Sweet! Man this stuff is taking a long time, but finally starting to come together.