We know that Samplitude/Sequoia are unique.

But, only by way of a simple relative comparison: in your opinion, what is the DAW that resembles the Samplitude in terms of GUI, features and workflow?

Adobe audition. From the menu style to the basic screen layout.

Adobe audition. From the menu style to the basic screen layout.

In fact I almost commented on the other thread about its appearance. Audition is well over 10 years old and still sounds as good or better than most daws.

It's 'scientific' style layout and plugging windows that I really disliked. other than that it has amazing stock plug-insthat are still better than most. And great audio quality.

I can't think of one - but then again, I've never had any experi

I can't think of one - but then again, I've never had any experience with Audition. I have a friend who uses Audition, and he loves it; but then again, I think you could hear the same thing from many people who use the DAW of their choice as well.

Having had plenty of experience with both PT and Sonar, I can say that Samp is what PT and Sonar should be. And they could be. But, they won't. And here's why, particularly with PT:

Because Avid's ego is far too big to give the public the impression that they are "following" any other manufacturer's design, implementation or feature set. They want to be known as the leader, the innovator, the de facto audio production program from which all other platforms base their platforms on.

Over the years, even going back to when they were Digidesign, they did everything they could to set themselves apart from the rest of the DAW's available. This separation included things like proprietary audio capture devices, partnering up with third-party plug manufacturers, and, along the way, doing their best to hide, as much as possible, the times when they did follow other manufacturer's leaps in design.

When PT first came out, it was good for digital audio - but for midi, it was a kludge. Most people I knew who were working with PT at that time were forced to run a separate midi sequencing program, because PT's midi integration was, for the most part, non-existent. So, most of those people who were running PT were also running something like Digital Performer as their midi sequencing program. It wasn't until Cakewalk Pro Audio came out with their platform (which eventually became Sonar) that offered seamless digital audio/midi integration in one program, and that allowed their customers to use any audio I/O that they wished, that made PT get on the ball and develop their program to do the same things.

Even recently, when they released their latest version, they made a big deal about the fact that they were adding VCA's, and if you read some of the early promos for that version, they were "hinting" - in a kind of roundabout way - that they were being "innovative" by doing so, as if no one else was offering that particular feature.

I'm not saying that PT is bad. Obviously, countless pro releases have been recorded and mixed on it. But they are not the only game in town anymore - and they haven't been for quite sometime. The reason why more people aren't switching over to other DAW's is because these people have so much tied up and invested into their PT rigs, that they can't financially justify the switch. And - right or wrong - PT remains the pro standard for recording studios. It's become an accepted brand - even to those who don't know much about audio recording. There are clients - who wouldn't know a pan pot from a pickle - who have heard the term Pro Tools tossed around so much in the vernacular, that they "require" it, even though they really don't know anything about it, nor do they know that pretty much any modern DAW can do the exact same things that PT can. It's become a buzz-word, like Xerox or IBM.

Personally speaking, I never drank the Avid Kool-Aid. I've used it - hundreds of times - as a hired gun engineer, but PT never really impressed me, at least not any more than any other modern DAW platform.

I went with Samp because - at least to me, (and I'm all that matters LOL), - it sounds better with raw audio, the editing features are awesome, and, once I got used to the program, and was able to get past that first initial learning curve, I was able to see (and hear) just how powerful the program was.

I'll continue to work in PT for those clients who insist, or who hire me to come to their place to record/mix, but when I am working on my own stuff, or am producing for others, I'm using Samp exclusively. There's just no reason for me to use any other DAW - with one rare exception - and that would be Harrison's MixBus... which is nothing like any other DAW out there, and is meant to act as a virtual analog mixing surface, for those who prefer to work that way, and who want that vibe/sound. And there are some occasions where I like working in that environment. But then again, it's only $40, so it's not as if I'm losing money by using it only a few times a year. ;)

In REAPER, I managed to simulate my Samplitude GUI very well, including the "Track Editor" (Mixer), which I fixed in the left corner. 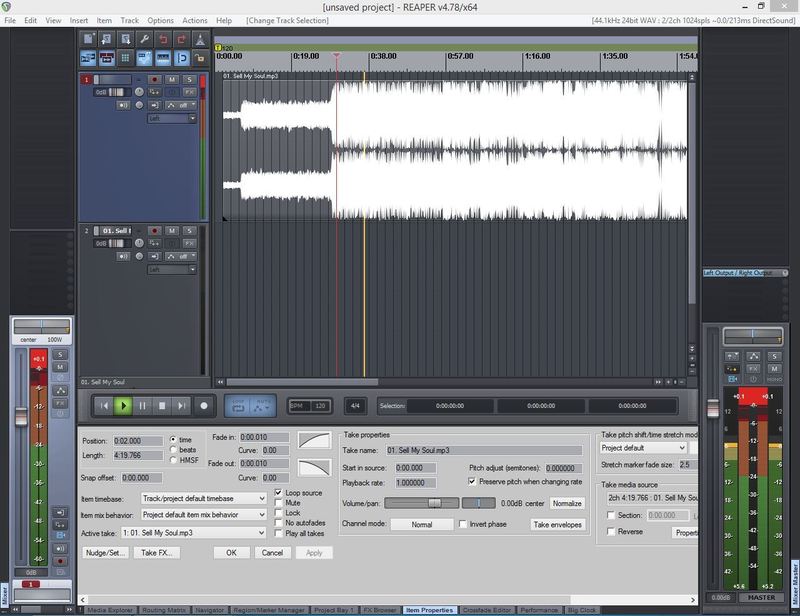