I have been using a 1010LT in a very basic home studio setup for a year or so now and have run into a kink now that I am changing my setup. My old setup used 1 out from the 1010LT to a receiver and from there I used either headphones or speakers to monitor. I recently got decent active monitors so I don't need the receiver anymore. I have the primary out I was using for the receiver headed straight to the monitors and that works fine. However, I want to use a second out to send to my mixer so that I can monitor with headphones as well (if needed).

I hooked up the cables and turned up the volume on the second output but I can't get any signal headed that way. I tried directly sending a signal output to it in Sonar but still got nothing. I'm probably missing something basic. Any help would be appreciated. Thanks.

...then from within Sonar on the drop down file menu select Opti

Click on the "driver" (output) to enable it. Your selected output driver should be of a darker color. Mine is blue.

Then maybe you'll say This is AweSOME!!! ?

Thanks for everyone's help. I had to end up just splitting the

Member Mon, 02/18/2008 - 13:04
Thanks for everyone's help. I had to end up just splitting the signal coming out. I messed around with all of the settings and still could not get any signal on any of the other outs.

From within Sonar you have to select an individual track, select

Space Mon, 02/18/2008 - 16:31
From within Sonar you have to select an individual track, select the I/O tab and this should allow you to route the track to any output channel that is selected.

By default, Sonar is using 1/2 out but is easily configurable to use all of the Delta 1010lt outs. This also assumes that Sonar has recognized the Delta 1010LT.

M-Audio has updated the driver for the Delta 1010lt recently, it may not help, didn't do much for me, but it is available as an option.

I have a 1010 and an external board and run Sonar mainly so it can be done.

To add to what Space is saying, for a headphone mix, what you wo

hueseph Mon, 02/18/2008 - 16:42
To add to what Space is saying, for a headphone mix, what you would want to do is create an aux bus or several of them depending on how many headphone mixes you need. Create your headphone mix by sending the individual tracks to whichever aux. This way you can tailor the headphone mix for each musician.

How many channels on the mixer? There is a point to the question

What are you calling the primary out - Line out 1&2 I assume?

Just to get kind of around the point, you can hook up all eight

hueseph wrote: Just to get kind of around the point, you can hoo

hueseph wrote: Just to get kind of around the point, you can hook up all eight outputs to the mixer if you wanted to and hook your monitors up to the mixer's main outs instead of directly to the 1010.

bent wrote: When you say "one output" are you talking about just

bent wrote: When you say "one output" are you talking about just one of the RCA outs?

What are you calling the primary out - Line out 1&2 I assume?

What we are all alluding to here is that you will be better off running the first pair (1&2) to two open channels on your mixer (say channels 15 and 16) - then you can route the signal from the mixer to go anywhere you want it to, as well as plug your headphones into it.

What make / model mixer do you have?

I see what you are saying. I'm a noob when it comes to signal r

Member Fri, 02/15/2008 - 08:03
I see what you are saying. I'm a noob when it comes to signal routing so I guess I was worried that it would get complicated bringing signal back into the mixer.

I've got a Yamaha mixer. I'm pretty sure it's this one (which is now discontinued):

I guess I'll have to break back out the mixer's instructions and figure out how to route things properly. Thanks for your help.

That's a nice little Yamaha there! I'll look at the manual too,

I'll look at the manual too, if I can find one, and help you if you have any more questions.

Perhaps a peak at the manual would do about now? I think your p

I think your problem might be in the MAudio Patchbay/Router application.

Check that under the Monitor Mixer tab that Wav Out 3/4 sliders are up somewhat, (you can tweak them better later) and that neither the Mute or Solo boxes are checked. You can mute all but 1/2, 3/4 and Master, if you won't use them.

Here's where it's going to get weird, my manual is in storage, and I am not up to experimenting with the settings I have my 1010 set to so you'll have to experiment on yours....since it doesn't work anyway! :wink:

Open the Patchbay/Router tab. The H/W 1/2 tab should be set to Monitor Mixer.

Just play around in there until you have an identical signal from Input 1/2 going out 1/2 and 3/4. And then "SAVE" it.

The manual may explain how to route it, but you'll definitely need the 3/4 sliders up, and unmuted and not solo'ed in the Monitor Mixer section.

If none of that works, there's a less-than-ideal way of doing it with a splitter cable from the outputs of the Delta...one to the speakers, one to the mixer. Or, you can do as was mentioned, and just run into your mixer first, then tap off the direct outs (if it has them) to go to the speakers. That's kind of like a "Y" situation, where the movements of the mixer knobs shouldn't affect the speaker outs, IF it's pre-EQ and pre-fader. (Check the documentation).

That may, though, preclude you from using the mixer as an input to the Delta, and still monitor, because you'll likely create a nasty little loop.

Read up on the manual, and play with the Delta Control Panel first. I believe there's a way to get it to route properly, though the exact method may not be documemted very well.

If you're using Cubase you will need to enable the VST outputs.

hueseph Fri, 02/15/2008 - 08:28
If you're using Cubase you will need to enable the VST outputs. If you're using ProTools M-Powered ditto. Enable those outputs in your device settings. I imagine it will be similar in any other DAW.

As Bent pointed out in the Delta control panel make sure that the outputs are active and not muted.

As far as your mixer is concerned, you can route all of your 8 outputs into channels 8-16. There shouldn't be any issues.

Edit: I see I was a little slow on the draw. :oops: 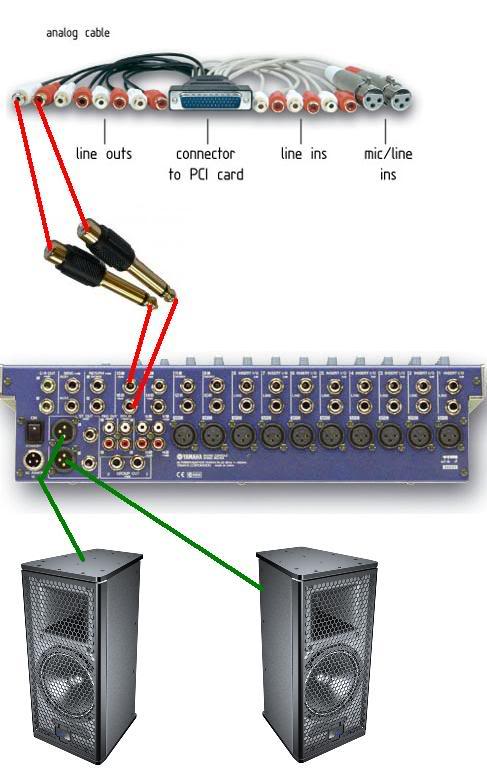 Oops, I just realized that those should be RCA(Male) to 1/4"(Male) connectors, my bad...

Thanks bent, Kapt.Krunch and hueseph. Those posts help a lot.

Member Fri, 02/15/2008 - 10:15
Thanks bent, Kapt.Krunch and hueseph. Those posts help a lot. I'm at work now but I'm going to play around with those suggestions as soon as I get home. This gives me a great place to start.