Hey all, Thought I needed to seek some experience and wisdom an micing. Doing my wife's second album (Cletic gospel), and about to record uilleann pipes.
I've not recorded them before and considering the different exits the sound comes out, I want to be sure that I mic it right.
It seemes to me that ambient sound could be important with such an instrument - what think ye.
Would appreciate any help from others who have recorded them before. :)

I used a K & K sound silver bullet and had it built into the chanter cap; it works remarkably well and maintains even tone when moving the chanter all over the place. I've got some pictures and a nice drawing. I had to make a 2 inch extension to the cap to keep it away from the windpipe. The insert which connects the main tube of the chanter cap and the extension portion is about an inch and a half and has a small bore drilled through it which acts as a sort of an orifice, keeping the wind to a minimum and directing the sound into the mic.

I use a standard shure mic for the regs. Doing it like this allows me to isolate things and use different effects in the FX processors. shoot me a line to know more

I may be able to give you some tips on micing the Uilleanns.

Some of my work -

They can be hateful little buggers to record right as there are many different places where the sound comes out depending on the type of set the player has.

A "Practice set" will have one place that the sound comes out from ... called the "Chanter"

Which is the pipe on the right with all the holes in it.

I like to mic the chanter with a large diaphragm and mic directly in front of it about halfway down the pipe ... not too close as the sound will be coming from different holes on the chanter at different times depending on what note the player is playing. 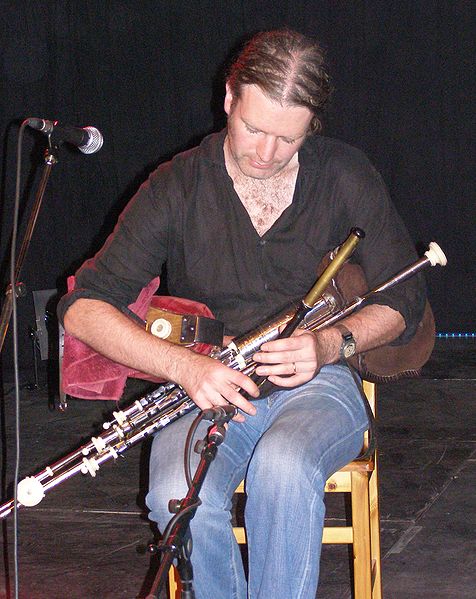 The "Drones" are the pipes sticking down and out to the left in the above picture.

I like to mic the "Drones" again with a large diaphragm and mic about 4 inches to the right from the white round cap on the lower left (which is the bass drone). This puts the drone mic in the middle of all the drones (the other drones are shorter pipes sticking out to the left). again not micing too close so as to pick up all the drones.

A "Full Set" consists of the "Chanter" "Drones" and "Regulators"

The "Regulators" in the above picture are the small levers that the pipers right wrist is laying on ... these produce harmony notes.

A third large diaphragm mic can be used for these, or you can scoot the chanter mic and the drones mic in a bit to pick these up.

I like to use a 3 mic setup on a player with regulators as I can get a better pan in the stereo image than with a 2 mic setup.

I like to pan the drones, chanter and regulators in the stereo field just like where they sit as I am looking at the player.

In the above pic, I would have the drones panned about 60% left, the regulators panned about 40% left and the chanter panned slightly right of center.

In the audio clip I posted above everything is backwards because the player was a lefty :D

You might want to try to look up Tari at http://www.BelaDMedia.com . I'm sure he could help you if he has time.

EricWatkins wrote: You might want to try to look up Tari at http://www.BelaDMedia.com . I'm sure he could help you if he has time.

Thinks for the info Eric, I appreciate the help. 8-)

I may be able to give you some tips on micing the Uilleanns.

They can be hateful little buggers to record right as there are many different places where the sound comes out depending on the type of set the player has.

A "Practice set" will have one place that the sound comes out from ... called the "Chanter" which is the pipe on the right with all the holes in it...Hope this helps!

Really appreciate your input. We have used Uilleann pipes on several occausions now, the last being a concert where we recorded my wife live for a DVD to be released with the CD.
It was this experience that made me want to find out more about micing this little begger. The live sound was miced too close and with a dynamic mic (sm57), which gave a somewhat thining sound.
Having walked around the pipes while they were being played in the recording room, one couldn't help but notice the different sounds from the different holes, and as we wern't using the drones (and having only just placed my post on several forums) I placed a Neumann KM series dynamic mic in front of the chanter and about 2' distance. I also placed a large diaphram cardiod (Rode NT2) about 3' above that one and another foot back to catch ambient sound.
As these were that only mics I had at the time I had to go with them. The end product was a very full sounding track, and much more like the true sound of the pipes.
Having now read your post, I am inclined to hire another cardiod for the chanter position and the others for the room. As we are not using the dromes I cannot see a reason for a 3rd mic; what think ye?? javascript:emoticon(':?:')javascript:emoticon(':idea:')javascript:emoticon(':P')
I would appreciate any further comments javascript:emoticon('8-)')