What kind of mic is this??

Hi everybody! I'm new to this site. I've been trying to figure out the type of microphones used in this video for months now! Any suggestions? Thank you!! And in case the link doesn't work, the video is of Miley Cyrus and Ariana Grande singing "Don't Dream It's Over" for the Happy Hippie Foundation. I do not need feedback on what you think about them as singers or individuals. I am only interested in the mics. Here's the link
Thanks again!


Thank you! I had looked into those and thought they looked a bit smaller than the mics in the clip above. I guess there's no way of being sure since they're rather difficult to see up-close in the video.

There's also a guy Shure recommends who can put in a Beta87A cartridge (super-cardioid condenser) if that sort of thing floats your boat.

I have a couple old 55s and they are not at all small. And none of them, (old or new) will sound good 'cupped' like that.

DonnyThompson Thu, 11/26/2015 - 02:06
Shure has made several mics to resemble older, classic ribbon models, for a "vintage" look. I have a friend who performs at upper-class affairs, doing old standards, and she has one of these newer Shure "vintage" models, but it's not a real ribbon mic, it just looks like one, but it's actually a dynamic mic, with an SM58 cartridge inside of it.

And... if these were real ribbons, no one would let them hold and shuffle them around, or tap on them like that, because ribbon mics are more fragile than dynamics and condensers... and, they wouldn't sound anything like what you are hearing in the video, either. That sonic texture isn't what a real ribbon mic sounds like, which is "darker" and far less hyped in the upper range than what we are hearing here.

Obviously with this video, it's not a live recording - any hint of that went out the window when Ariana taps along to the beat of the song with her fingers on the mic... LOL

So, these are just props. If you are interested in the way the mics look, then that's one thing, and the guys have already talked about what models they could be. They aren't very expensive.

But, if it's the sound you are trying to match to the mic, you're not hearing those mics in this video...

I'm not saying it's not possible that they tracked vocals through a dynamic mic in the studio, but my bet is that they were probably singing into a high dollar LD condenser, through a very nice pre, and in a controlled environment, too.

As Donny indicates, the usual commercial process for this sort o

Boswell Thu, 11/26/2015 - 09:17
As Donny indicates, the usual commercial process for this sort of sham presentation is that the track is first recorded in a real studio using proper gear and microphones. Subsequently, a video is shot where the main performers mime to the recording using microphones that are non-functional but to the amateur public look like the real thing.

After 1951 the 'small' version (the one the modern Super 55 and 55SH classics are modeled after) was about an inch narrower, and ½" shorter. After that I think they relied more on foam and rubber for shock-mounting, which made them quite a bit more durable.

[But their sound like still suffer if you treat them like bongos, or cover up the vents in the back.]

A modern 55. The original Shure 55 for comparison. 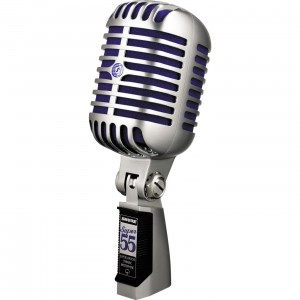 The original Shure 55 for comparison. 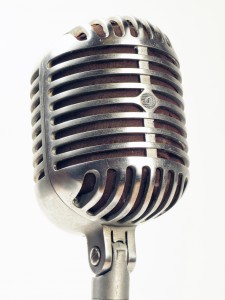