How to connect Yamaha MGP24X Mixer to computer

Hello Everybody. My Name's Tomáš Kontra and I'm Owner of Recording Studio in Slovakia. I Used old Technic and there was time to Improve it. I Bought Yamaha http://usa.Yamaha.c… MGP24x Mixpult.

Now I Have big Problem. I Need to connect it with my PC and I Don't Know How. When I Connect it through Scarlett Focusrite 18i8 External Soundcard my Adobe Audition CS6 Reads only Soundcard Mics and lines. It's not problem I'm Able to Record it through but It Reads my Mixpult as 1 Source and I need whole Mixpult to be connected with my PC not only as One Source. I Hope You Understand. I Need just to my Program reads all Inputs and Outs off Mixpult separative. Sorry for My English but I'm Really not good in it. Thanks for Replies.
God Bless Y'all

Welcome. I'm only looking at this quickly with a guess. :sleep:

I'm only looking at this quickly with a guess. :sleep: I'm sure others will help more as well.

Mixpult doesn't have USB Interface and That's a problem. Soundca

DrReal Mon, 09/15/2014 - 12:55
Mixpult doesn't have USB Interface and That's a problem. Soundcard has. I Don't think it may be something with Master or Slave. I Join Pictures of Mix and Soundcard 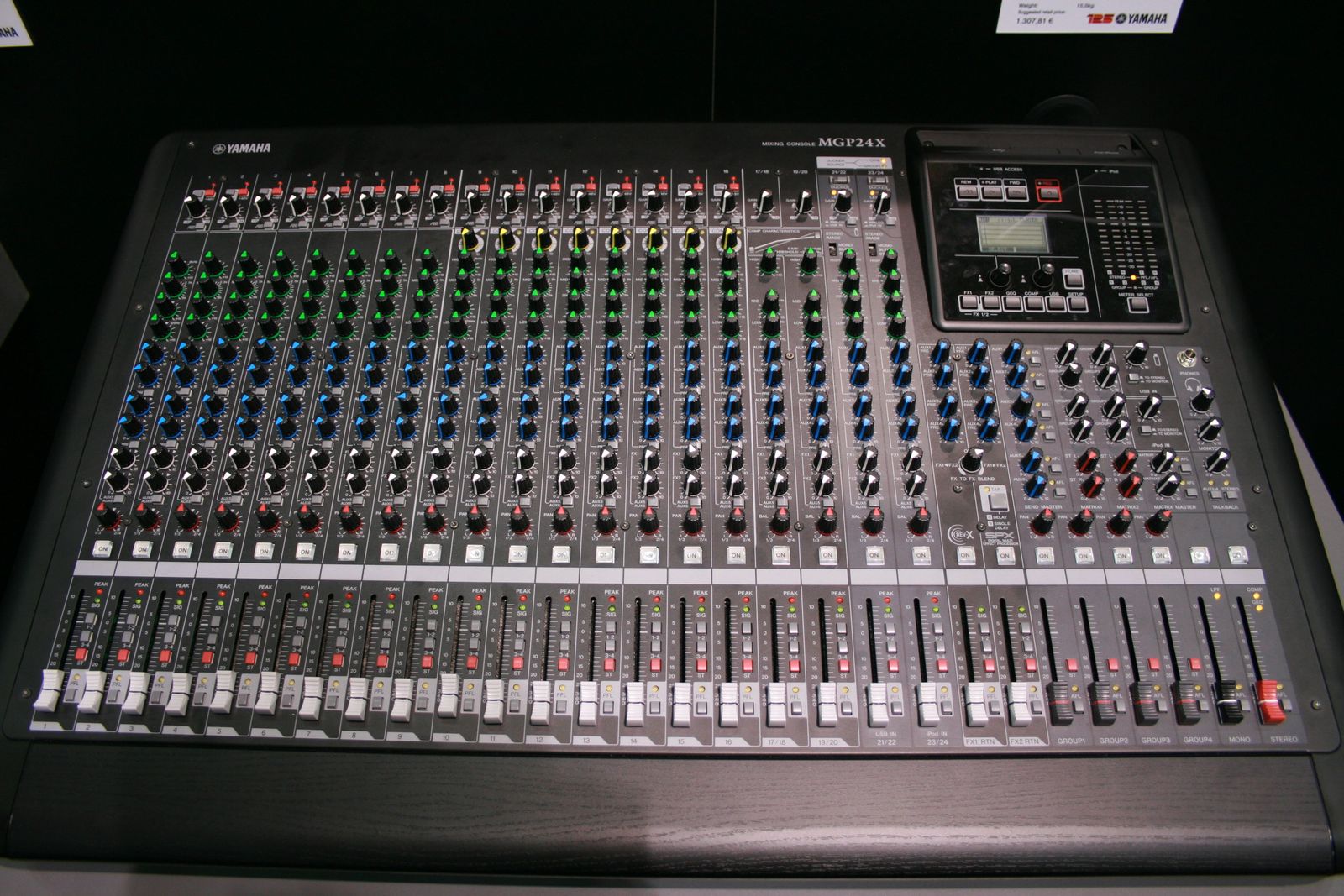 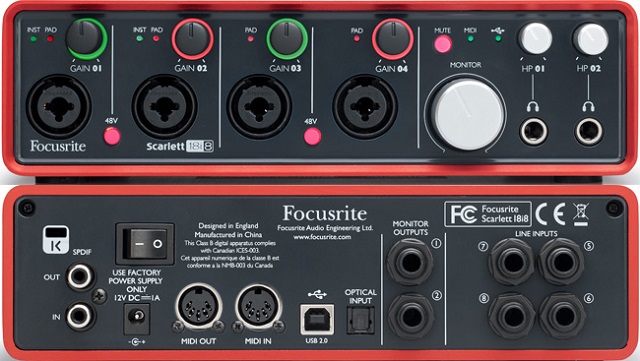 audiokid Mon, 09/15/2014 - 13:00
I can't quite see the connection on the back but it looks like there is an optional slot for a card in the Yamaha? What does your manual say in regards to connecting it to other devices and options?

Being said, just guessing again but you may have to use the cons

audiokid Mon, 09/15/2014 - 13:04
Being said, just guessing again but you may have to use the console as a stand alone mixer that can stem into Scarlett. Which isn't a bad thing at all really.

What you you hoping, that the Yamaha would act as a controller for your DAW too? The console appears to be more suited for live PA or demo recording.

Look. I have connected Soundcard with Mix and PC. It works but M

DrReal Mon, 09/15/2014 - 13:11
Look. I have connected Soundcard with Mix and PC. It works but My PC Reads only Scarlett and I Can't use Mixpult (Monitors;Separative Recording;etc.) that's why I Need to read all Channels off Mix in my PC. Now it reads only Soundcard Channels and puts. Yes This Mixpult is also Great for Live Recording but It's also Great choice in Studio recording. And with Manual is the biggest problem. It was never released in my Language so I'm confused in this.
http://www2.yamaha.co.jp/manual/pdf/pa/english/mixers/mgp32x_en_om_b0.pdf

Boswell Mon, 09/15/2014 - 15:46
The MGP24X does have a USB interface through which you can record either the stereo main mix or the Matrix Out 1 & 2. Both these sources are each only two channels. Recording this way would by-pass your audio interface.

If you want to record more than two channels and if you want to record the raw (pre-fader) tracks, you can use your Scarlett to capture the signals from the insert jacks of any 8 of the mixer's mono channels. To do this, you would need either to wire your own cables or to purchase Hosa adaptors to work with a standard TS plug loom. I can give you further details of these cables if you need them. Standard cables will not work.

The Scarlett 18i8 interface has 8 analog input channels, so that is the maximum you can capture from the mixer without using additional external A-D converters. To capture 8 channels, you use the specially-wired cables to take 4 channels into the 4 front panel combo jacks on the Scarlett and 4 into the rear line input jacks. You would need to switch the 4 front panel inputs to line levels.

If you are really desperate to capture a further 8 (or possibly 10) channels from the mixer, we can give you details of the type of additional hardware you would need to purchase.

anonymous Tue, 09/16/2014 - 01:24
Your USB access is above your meters and transport on the console. But, as Bos mentioned, you can only use them for either a stereo main mix or a Matrix mix...and these are both only 2 channel-at-once recording.

This is one of the reasons why it's not really the best choice for studio multi track recording. True recording consoles will have multiple outs either via USB, Firewire, or analog; allowing for each channel on the mixer to be sent to a corresponding track to your DAW - ( what you are referring to as "separative").

I'm a bit confused as to why you didn't confirm this before you purchased the console, if you were purchasing it to be used in the way you want to.

Yes this Hardware should help. In Music Centrum where i bought i

DrReal, post: 419448, member: 48462 wrote: Yes this Hardware should help. In Music Centrum where i bought it they told me it's simply best way to go through it.


You have to be careful when dealing with music retailers, and by that I mean everywhere, not only in Slovakia. Their first aim is to make money, and many times they will sell you something that isn't necessarily what is best for you - but simply because they have too much of one item in their inventory and want to get rid of it. I'm not saying that this is what happened in your situation, but you need to be careful when dealing with music stores. Very often, they do not have your best interests at heart, and simply want to make a sale.

Now, this mixer may very well be the best way for your geographic area and equipment availability, not to mention price. But, in the future, you may want to get a console that is actually designed for multi track recording.

Basically, what you have is a live console that can do a little bit of recording, in a very limited capacity.

Here are a few choices you may want to look at in the future, if the Yamaha turns out to be too limited for what you want to do:

Thanks Guys. I'll Send my Mix Back... I'm Very confused with new

At your price range, you can get something like this which gives

anonymous Tue, 09/16/2014 - 06:17
You are at a price point that's a bit tough to fill in terms of what you want to do. Short of buying something used off eBay, I can't personally recommend anything new in the area of $1000 Euro.(Maybe someone else here can).

If you were able to increase that amount to around $1700 Euro, it would open up nicer possibilities for you - at which point I would stand by my original suggestion of either the Presonus Studio-Live 16-4-2 AI,
or the A&H Zed R16.

These are both 16 channel consoles. The Presonus is more "digital" in its layout and design, the A&H has more of an "analog" layout... but both are able to interface with your computer through a Firewire connection,
(regardless of the one you choose, you'll need to have a FW card built into your current computer, or you'll need to add one) and each will allow you to record as many as 16 tracks at one time, and all of those would be on your DAW as their own separate /discreet tracks.

So, for example, if you had drums coming in through channels 1-8 on your mixer, - kick drum on 1, snare on 2, hi hat on 3, tom 1 on 4, tom 2 on 5, etc., these would end up as corresponding discreet tracks on your DAW... track 1 kick, track 2 snare, track 3 hi hat, track 4 tom 1, track 5 tom 2, etc... at which point you can mix each track independently, adding EQ, gain reduction, or effects, etc. to one track without having to do the same thing to another track. This is referred to as "discreet mixing" .... or what you are calling "seperativity".

There are a few members here who would prefer the A&H over the Presonus, because they feel the Preamp and EQ's on the A&H are less "digital" sounding, and are more reminiscent of analog gear and analog sound.
They like the tactile (hands-on) layout of the console, which allows them to adjust EQ by actually turning pots and pushing faders. Then again, some might prefer the Presonus because of the XMAX preamps, or because it has software-based "Fat Channel" processing that allows you to actually print various types of processing to your audio on the way into your DAW.

I don't have the A&H, I have a rack-mount Presonus with 8 mic preamps, and I can say from personal experience that the preamps sound great... but I wouldn't go so far as to say that they sound better than the A&H.
One of our other veterans here on RO - Boswell - has an A&H Zed, and he really likes it. He could tell you more about it than I can.

A&H has a long history of quality in design and build, but Presonus has also gained a reputation for the same things.

Both companies are good about customer support; things like adding necessary updates, fixes, firmware and software patches. Both of these consoles have plenty of instructional support videos available on the web.
So, you won't go wrong with either of these consoles. The one you choose will eventually be based on certain details that you feel will be more - or less - important to you, based upon your own individual methods and workflow.

Good suggestions Donny, I Had the same idea but since it's out o

Actually the A&H R16 is a very different beast because it is an analog console with AD/DA converters. What is great about it is that you can use it to record up to 16 channel and you can also mix out of the box (or do some summing)
I don't own one but I've been told it sounds very good.
Of course if you have a 16 channels 2000$ mixer, it meens each preamp are Worth about 100$
If you buy an external preamp like a isa one (around 400 $ for the preamp) it's bound to have better quality.

But those presonus and A&H are impressive for the price !

DrReal, post: 419448, member: 48462 wrote: Yes this Hardware should help. In Music Centrum where i bought it they told me it's simply best way to go through it.

If you are meaning external hardware that will enable you to record an extra 8 channels, then you should look at units such as the Presonus Digimax D8 or the Focusrite Octopre Mk II. These have 8 analog inputs with A-D converters and an ADAT output that would connect via lightpipe into the ADAT input on your Scarlett 18i8.

The Australian company SM Pro Audio also makes a couple of units that may be of interest: the Q-ADAT and the AB8. Both of these are 8-channel line-level input boxes with ADAT output. However, for some mysterious reason the AB8 is not available in Europe.

If you are instead going to take your mixer back to the shop, then the suggestions for a replacement made by others are good. Either the Presonus 16-4-2Ai or the A+H Zed-R16 are excellent quality and will give you recording of individual tracks to your PC. Surprisingly, the Zed-R16, which is a 16-channel analog mixer, has a mode for using faders as inputs for controlling DAW software during mixdown, a feature that, as far as I am aware, the Presonus StudioLive range does not have.