Help getting audio from mixer to computer

Hello everyone I need help figuring out the Yamaha MG124CX. So basically my Uni has a dj room and it has a microphone that I can connect into it (but not in to my macbook) and rca cable to aux. The mixer recognizes audio from the mic, and I can hear it on the speakers. Reading manuals and online, I connected the rca cable in to rec out and aux in to my laptop, but it doesn't recognize any device. I can use this cable to play music from my laptop tho.

I'm wondering what I'm missing, maybe some button on the mixer or something. Thanks for reading.

Does the mic have XLR connector ? If yes use XLR to XLR on a channel for the input.
As for the send to computer, I would personnaly use an insert cable into the insert connector of the mixer (one end is input and the other is the output) then take the output to your computer's line input.
We should check the manual to see what the rec out signal includes.. But using the insert cable will let you isolate the signal and record only the mic..
That way if you send the signal from you computer to the mixer at the same time, you would not record back the computer, just the mic. (also avoiding feedbacks)

Ok that aside, I don't know what you want to accomplish but if recording it is, having a proper audio interface would greatly help for the performances and the quality.
Some would also have all the inputs and output needed...

On the MG123CX, the RCA REC OUT connectors always carry the same

If you are convinced that the cable you are using works (RCA - minijack plug?), then your problem is likely to be in your laptop. You have to select the correct input, probably line in rather than mic in, but this will depend on the make and model of laptop you are using.

If you have a minijack plug - minijack plug cable available, you could try sourcing a signal from the headphone output of your mobile phone rather than the mixer. Doing this would determine for sure whether the problem is with the laptop.

Hello, and welcome. Is your goal to record the sound from the m

If it is the first one, what macbook do you have that has an analog "aux in"?

If it is the first one, what macbook do you have that has an analog "aux in"?

Thanks everyone for the replies. Yes I mispoke, I meant to say rca to the jack, that you’d expect a macbook to have. My goal is to record vocal with the microphone. I am able to play sound from my laptop if i plug it in to one of the outputs. Is the rca cable to jack only one way? So they can’t both be used for sending audio from computer and sending audio to computer? I will try some of your suggestions to see if my laptop is the problem.

I doubt a computer would have an RCA (phono) connector. It would

I doubt a computer would have an RCA (phono) connector. It would normally have 1/8" sockets. A laptop might only have a headphone (output) socket. A desktop probably has a headphone socket, an audio output socket (for speakers) and a mic input socket. Some desktops may have a line input socket, or a way to use the mic input as a line input.

But a more reliable way to get audio into a computer is to use an audio interface. Audio interfaces are a lot like the onboard sound cards of computers, but they have some features that make them much more versatile, such as analog level controls, XLR mic inputs, pro line level inputs, direct input monitoring etc.

+1 on buying a proper audio interface (in my prior suggestions)

+1 on buying a proper audio interface (in my prior suggestions) ;)

I figured he was probably using this kind of cable : 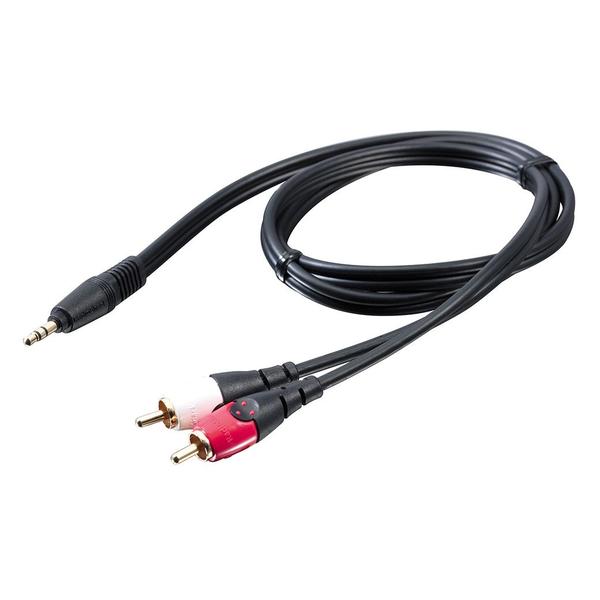 I figured he was probably using this kind of cable :

Could be. What if the input is a mono mic input?

mevsphong, post: 462731, member: 51732 wrote: Is the rca cable to jack only one way? So they can’t both be used for sending audio from computer and sending audio to computer?

Yes. The headphone jack on your macbook passes audio just one direction (out). When you use analog inputs or outputs your computer won't recognize the connected gadget(s) as a device. There is no "digital handshake" of ones and zeros like computer peripherals would use to identify themselves to one another. Analog inputs and outputs are just waiting to pass continuously varying voltages (in one direction) to the next device.

There are some macs with built in analog audio inputs, but you would know if you had one. It would have two different jacks on it. Some macs are also equipped to send digital audio out of their headphone jack using a variant of a fiber optic connection called Toslink with an 1/8" (3.5mm) Toslink adaptor. Some can also receive digital Toslink audio input (on their separate input jack) using the same type of Toslink adaptor. Even then, although Toslink IS a digital format, it needs separate connections and separate cables for input and output. https://support.app… Further reading about mac audio ins and outs.

As other have suggested, the best solution to do what you're describing with one microphone would be some sort of USB audio interface like this: [url=http://'https://www.thomann…. (or whatever number of mic inputs you'd like) Something like that would simultaneously send and receive audio over a single USB cable connected to your laptop. You can listen to what you're doing either by using headphones, or by connecting the Scarlett to a suitable speaker system.

Instead of the workflow I think you're envisioning; Playing music out of your laptop -> Into the Yamaha >< mixing the music and microphone together with the Yamaha and then -> sending that mix back into your laptop via some magic connection ... The more efficient method would be to connect the Scarlett (or similar device) to your computer > import the music file directly into the software included with the Scarlett >> plug the mic directly into the interface and avoid using the Yamaha mixer completely.

If you record the first way, , you are committed to that mix forever. You cannot change the mix afterward. If you have a great vocal performance, but don't get a good balance between the music and the vocal you are out of luck. Then you have to decide if you want to live with the bad mix, or keep on recording and hope you can recreate the great vocal take. You cannot isolate either source afterward and if you decide to add more vocal or instrument parts afterward, you would have no way to remix things to allow for the new parts.

Using the Scarlett (or similar device) with whatever software it includes, you can mix and edit everything using the software. Using the Scarlett software, you can mix it over and over again until you're happy with it and even save different variations along the way. Using the Scarlett, if you like all of the vocal performance except the ending, you can just "punch in" and retry the ending as many times as necessary. If you are inspired to add more parts later, simply record them alongside the original tracks and mix them all together when you're done. You can't do ANY of those things using the Yamaha as your mixer.

I hope that helps. Good luck!