Speaker Placement For A Club

I'm loomking for some advice on speaker placement within a club that someone I know is re-building.

Below is a rough plan of the club: 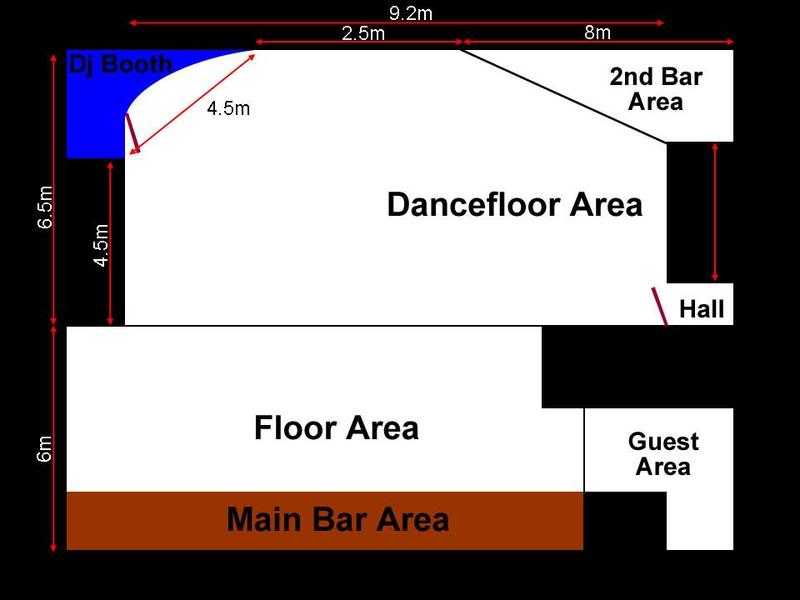 The DJ Booth at the top left is enclosed so there is a solid curved plasterboard wall there, which will have a window included in the design and also a door.

At present, the 2nd Bar Area has a curved wall similar to the one at the Dj Booth but this is being knocked down and will be open plan.

The Main Dancefloor is joined onto the Floor Area, this to is open plan.

The Guest Area is joined onto the Floor Area and this too is open plan.

Everything in black on the plan above is solid wall.

It's a pretty weird shaped room so i'm not sure what the best position would be to place the speakers.

When we placed the speakers to the left wall, the sound around the middle of the dancefloor was good but nearer the top wall it lacked bass. It also lacked bass in the floor area but this isn't a problem as I think the idea is to try and keep the sound within the dancefloor area.

When we placed the speakers to the top wall, the sound within the dancefloor area was good and covered a wider area. It was lacking bass near the entrance to the hall but this shouldn't be a great deal either. Can I just add that the curved wall I mentioned was still up when we did this.

Here are some images that I took if it gives you a better understanding of the set up: 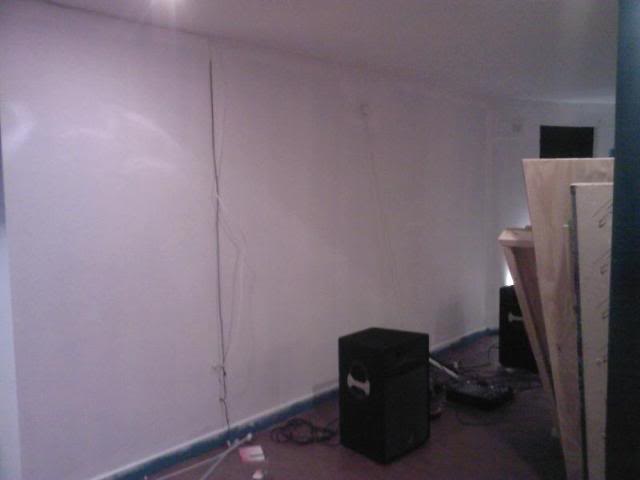 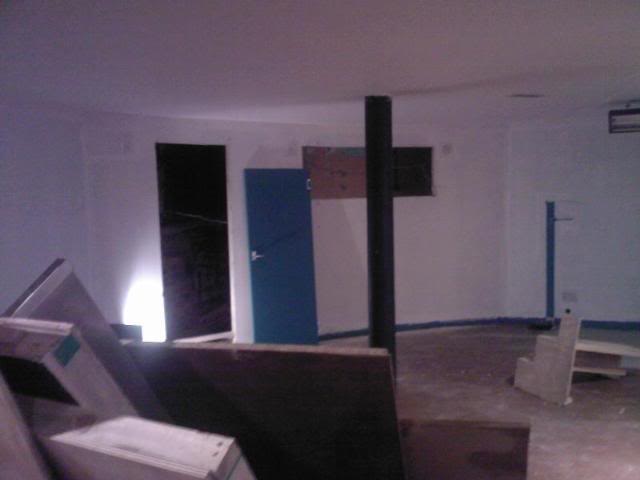 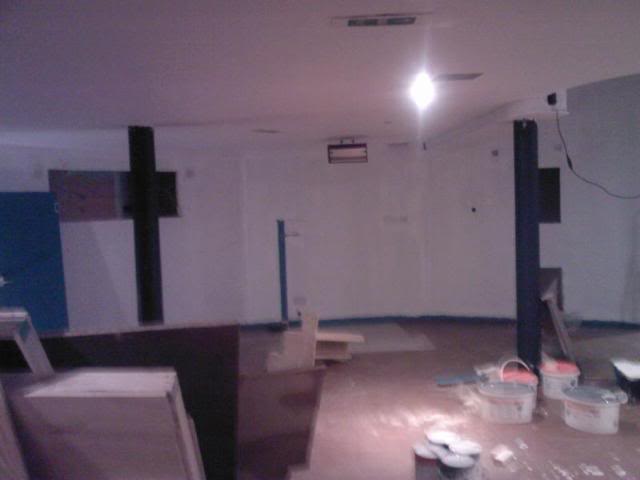 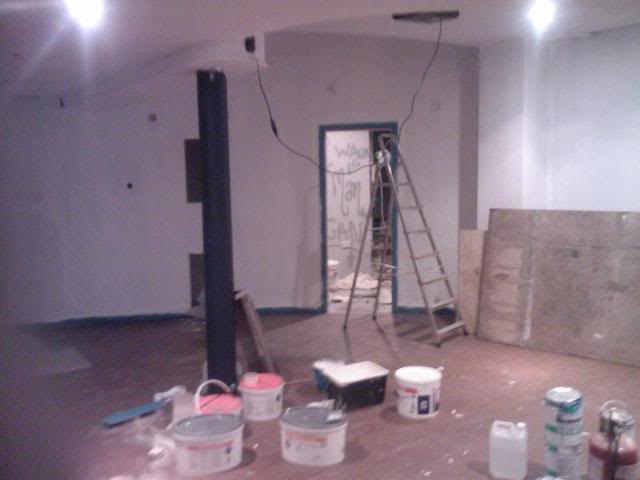 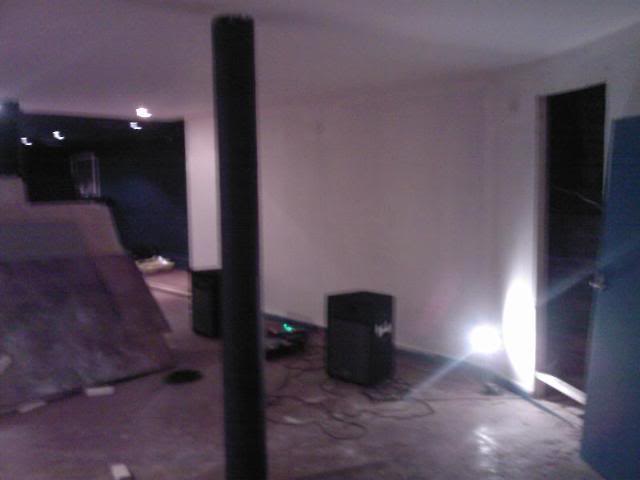 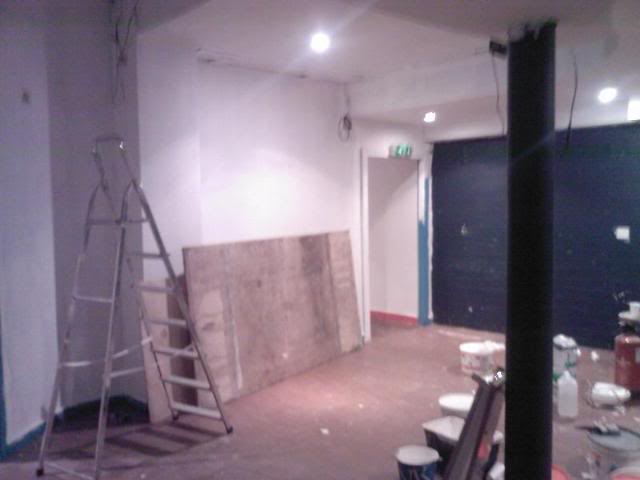 Any feedback or ideas would be much appreciated.

Also, where would be the best location to put the bass bins? As far as I know, the speakers and bass bins will be inserted into the walls making them flush
Thanks,
Bryan

I'm surprised nobody's replied to this one yet. I gotta say, th

I gotta say, those are some LOW friggin' ceilings, man!
A nightclub, you say?
Man, the place looks loud and reverberant as all get out.

Where are you at so far with this?

yeah, i'd say find a new room! or a TON of treatment

Looking at the room I would say this is not an easy task. The us

anonymous Fri, 02/22/2008 - 05:20
Looking at the room I would say this is not an easy task. The use of a pair of speakers and a sub will not work well. This is going to need a professional install even though it is a small room.

I feel you would need to zone it out. Something like one zone for the dance floor with subs and other zones for the bar areas without subs and just some smaller speakers. Definitely sound treatment, a lot.

One question is which way are they dancing? Facing the wall with the DJ and second bar area or parallel to them or just in more of a circular way like in the movie "Saturday night fever" which is center stage?

The low ceiling is a BIG issue. I would use a lot of smaller speakers with some small subs for the dance floor. Maybe by using powered speakers cabinets a lot of problems would be solved. At the bar or near it smaller less powerful powered speaker boxes with a 10 or 12 and one's with a 15 on the dance floor with 15" powered subs or even dual 12's with a little throw and array them. The bigger 15 and 18 subs might not be good for such a low ceiling.

Like maybe a pair of smaller speakers in the guest area just loud enough to be heard without interfering with the ability to talk. What I am trying to say is think in terms of filling the room with a good sound as opposed to overly loud thumping noise which could actually hurt business. But to dance you need the thump.

Break each area up into squares or separate boxes and use that as a guide. Knowing which wall to put the subs on and which way to face them is very important. Hanging the boxes and at what angle to face them, you have to pick a point and face them all at this specific point. Like the middle of the dance floor, the center of the main bar and so on.

It's a science that I do not know. I am only a layman with some experience.

definitely get a bunch of smaller speakers... maybe 10" or even

keep the volumes down in all of them, but make sure you have plenty of them. like 10 or more.

get a few subs for the dance floor area too. again, look into smaller sized subs... like the Yorkville ES700p or something.. with 10" drivers.

you'll have terrible phasing and acoustic problems, even with moderate treatment.

but that's probably the best way to distribute sound equally.

bent wrote: I'm surprised nobody's replied to this one yet. I k

bent wrote: I'm surprised nobody's replied to this one yet.

So far the joiners are in doing various jobs and i've not had a chance to go back up and place try out some placements.

As mentioned, yes the ceiling is rather low. I don't think anything major could be done to sort this.

It's kind of a weird nite club to most I suppose. I'ts actually downstairs so it's more of a basement than anything.

From what I know the "Dancefloor Area" that I marked on the plan will be where most people will be dancing, probably right bang in the middle. I'm guessing that they will also be facing the top wall as this is near the dj booth area.

I think what the owner has in mind is simply to use the dancfloor area as the only place where the sound will be coming from, leaving the bar, floor area, guest area untouched. Would this be advisable? Also he is simply wanting to make use of some peavey pro 15 powered speakers that he has from another venue and buy a couple of subs.

I know there are limitations with the design of the building but in my opinion there is a chance here to create a good sounding venue and simply making use of what you already have isn't really what is best. However, I am not the one funding the project!

The previous owners to this club had this sort of set up and it closed within 3 months! They had the dj booth in the middle of the top wall, with a speaker and sub either side of them facing towards the middle of the dancefloor. I didn't get a chance to hear this system but it would appear there would be alot of cancellation when standing at various spots within the club.

Regarding acoustic treatment, how much and what should I be looking into here?


A BIG thanks to all for the responses and i'll look into this further.

If anyone has any further advice or suggestions then please let me know.