Will a microphone with a frequency response of e.g. 50-15000 Hz not capture anything at all above 15k?

Hello! Been a while since last time I posted here.

In all my years of recording I have never bothered to learn what the specified frequency response (FR) of a microphone really means. I have always thought it means that the mic wont capture anything outside of the FR range, but is that really true?

According to Shure the FR "defines the range of sound that a microphone can reproduce and how its output varies within that range".

Take the SM57 for example, will it not capture any sibilance of vocals at all above 15k? Or does it still capture stuff above 15k but lower than a mic with a wider FR would?

Have a nice day!

the natural roll off of any microphone wouldn't cut off abruptly

I'm not tech savvy but I'll take a guess for fun! To my knowledge, the natural roll off of any microphone wouldn't cut off so abruptly to where the freq you mention would not be heard or seen on a scope. There would likely be, and should be (imho) a very gentle curve diminishing as microphones are very much like our ears or speakers. ???

HPF or LPF placed before or after the path of a mic would do this but I don't think the microphone itself would hard cut freq without a deliberate cutoff added into the mic.

Here a great breakdown from my long time friend, John Jennings of Royer Labs. Granted this is bias to ribbons but it still is about microphones. https://royerlabs.c…

Thanks and thank you for…

Thanks and thank you for replying!

I've been using a Shure Beta 58a for my vocals for years, and it has a specified FR up to 16 kHz so 1k higher than the SM57. I started this thread because after thinking about it I analyzed dry vocals with spectrum analyzers (Voxengo Span and Fabfilter Pro-Q3) and there is sibilance way above 16k, there is actually information up to 22k (I record in 44.1) albeit very low. However, the roll off do start at 15k but if I boost with 10 dB at 18k I can hear a clear difference even with my 40 yo ears, even if it's nothing useful there IMO.

Regarding ribbon mics, it would be very interesting to try one that is completely flat and actually color myself with EQ. Last year I finally ditched loudness mastering completely, and as a result I've immersed my self in learning much more about EQ-ing. That's why I've been thinking of getting a mic with a higher FR. But maybe it's not meaningful? I do however need to have a directional dynamic mic because of poor acoustics so a ribbon is not an option.

Usually the   frequency cut off measured by where the signal decreases from the flat band  by 3dB (or half power). 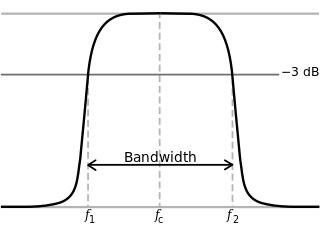 Ok cool. So in theory I…

Ok cool. So in theory I should be able to match the FR curve with an inverted high shelf EQ with a slope that matches the cutoff slope and widen the FR as long as the DAC is quiet enough? Not that I want to, I just want to understand the concept. 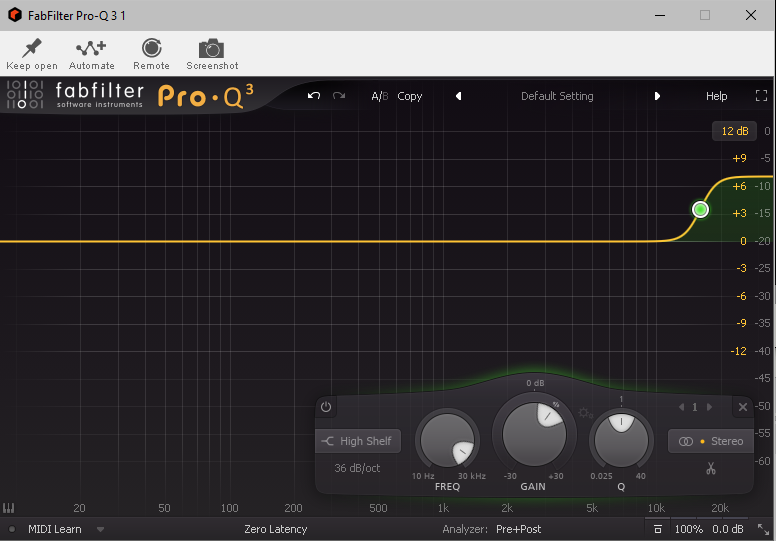 ... the problem using an EQ to boost or reduce “additive”or “subtractive” freq beyond 3db (which could be more or less) can also effect the adjacent octave freq you are moving above and below those frequencies, to also boost or reduce as well.
This can causing weird phasing issues in the sound. You usually want microphones to be as natural as well.
In your case, boosting to get those Frequencies that the mic doesn’t naturally have,  it could produce a very unnatural sound with spikes.

When extreme EQ is needed, it’s said the subtractive choice is the better choice as it helps avoids energy build up too. The EQ is a beautiful thing but savage moves often comes with negative results.

There are shortcomings in…

There are shortcomings in representing the high-frequency cut-off point of a microphone or even the human hearing system by using a single frequency value. If done correctly, this value tells you at what frequency the response of whatever it is you are measuring has dropped to the half-power value (-3dB) relative to the response at some other lower frequency, usually 1KHz. These responses are measured using steady-state single-frequency tones.

What the single frequency figure cannot tell you is how fast the fall-off is happening, nor whether the non-steady state response would show same behaviour. In the case of most ribbon microphones, for example, the -3dB figure is often around 15KHz, which could mean that listeners to recordings made using those microphones might find them dull or lacking "sparkle". However, the roll-off is smooth through the -3dB point, with no phase anomalies, and they can take a small HF boost in EQ produce a really pleasing sound, quite different from that of some condenser mics that have a deliberate high-frequency bump in the response curve.

I mentioned the human hearing system earlier, and also non-steady-state testing. The human hearing has additional sensing and processing for transient sounds, and it has been shown that responses to these fall off less quickly with age than the steady-state single-frequency figure would imply (what you get from a "hearing test"). A typical sound mix from an orchestra or a band has a combination of transient and steady-state sounds, so a person with falling high-frequency hearing as measured in a test still can enjoy concerts, often because other parts of the hearing system are in play along with the steady-state.

The result of all this at the microphone level is that you should take the frequency response figure as merely an indication. Look at the shape of the response curve, look the self-noise and the intermodulation distortion figures. Above all, listen to the results from recordings made using the microphone on as wide a variety of sound sources of different levels as you can find. Does it sound smooth or does it grate on the ear? Remember that a gently falling-off response lends itself to correction with EQ, where a harsh sound does not.

As a final thought, I find that, when testing the HF performance of microphones, it's best to use 96KHz recording, since it pushes any "top octave" phase wobbles of the recording system well out of the frequencies of interest.

You may enhance upper frequencies with the EQ.

Sorry for the abscence. I've…

Sorry for the abscence. I've read your replies and it's interesting stuff, especially about how the human hearing handles transients with age which was completely new to me.

I recently got an SM7b but haven't had time using it yet, but I'm very curious to see how the transients from my vocals will be without EQ since it has a higher response range.

If subtracting is the best way to use an EQ, what if you instead of boosting a frequence subtract everything below and above of it with e.g. a low and high shelf and then just raise the volume on the track. Probably this is the same thing as just boosting the frequency, but maybe there is something in the way an EQ behaves that makes this a better method?

A few years back I heard a rap song where there was something with the vocals I couldn't place, the transients were so pleasant and smooth. It turned out they had used a Lauten Audio Eden LT-386, a tube mic. Wish I had that kind of money.