Just curious if anyone out there is using a daw with hybrid buffer, and how the experience has been.

I'd like to test the difference between say reaper and samplitude, to see how much DSP I get in both. If samplitude is significantly less I will submit a feature request to Magix.

Its remarkable to me that this feature hasn't appeared sooner given that the computer resources have been the limiting factor since day 1 of daws.

Excellent feature if you ask…

Excellent feature if you ask me! Thank you for sharing this, I didn't know it existed . Anywhere we can optimize CPU, allocate the most resource to task at hand the better. It makes total sense.

Hey Kyle, I wonder if Samplitude already has what you are wondering about in the Performance and Extended Buffer Settings? 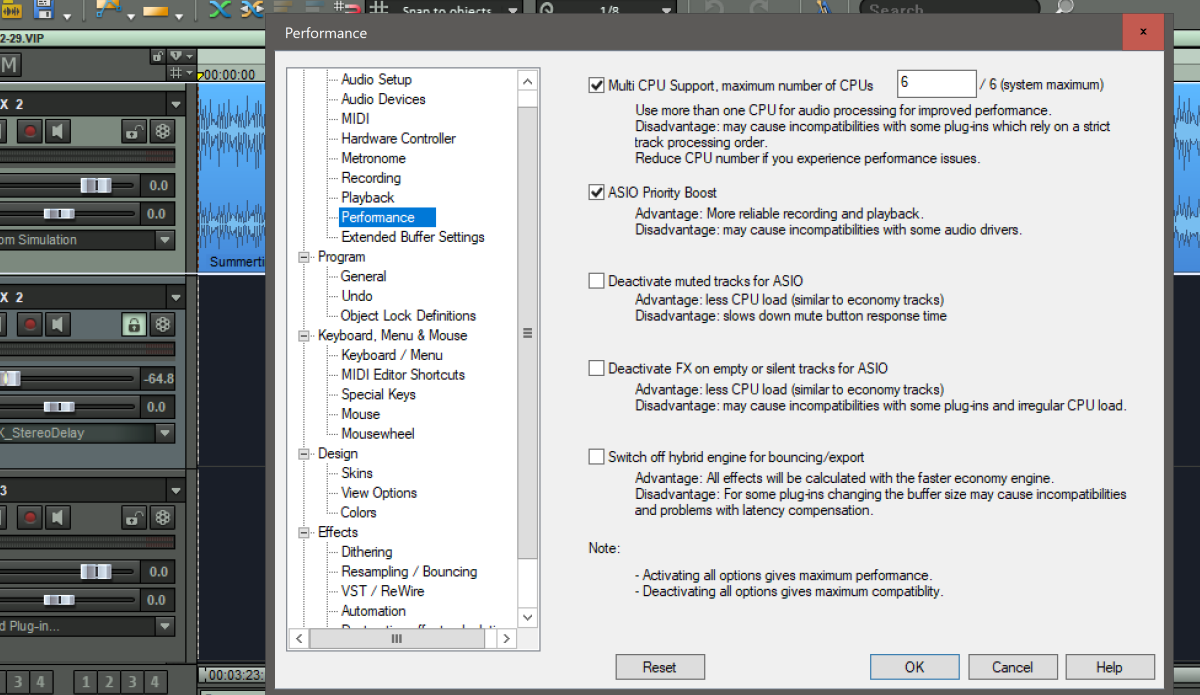 Hmm good call Chris. I will…

Hmm good call Chris. I will try and get ahold of the manual, as I'm not quite setup yet.

I know Magix does something where they disable any effects on tracks that aren't outputting audio at that particular moment.

What version of Samp is the…

I believe the advanced buffer has been included in both Samplitude and Sequoia for a decade at least. When I was on Windows XP, I recall trying to improve the latency I was experiencing with large track counts and messed around with the Advanced Performance settings and eventually realized that I needed to focus more on the interfaces and their ports to improve this. Eventually I stepped into MADI and RME PCIe and I never had an issue again. I could run 64 tracks with plugins, hybrid DAW system and do punch-ins on a quarter bar loop indefinitely without it loosing sync.

Yeah I'm on the same version…

Yeah I'm on the same version. Will probably move to pro x7 when it arrives. I'm curious about what exactly those settings do, gonna see if I can find the manual.

I think the point of the hybrid buffer is so you can overdub with plugins on the live track into a session that has alot of plugins on it.

The most stable systems I've used have always been pcie based as well. I think I'm looking in that direction for when I move into the new place. I don't quite trust thunderbolt, FireWire is all but gone, and USB just doesn't seem as robust as pcie.

I don't think alot of people are aware that your interface has an effect on your pluggin count.

I also now have it stuck in my head that I don't want to switch buffer settings in a session ever. AdmiralBumblebee did a series of videos where he showed automation moves get shifted in some daws when buffer settings were switched, and other glitches. Lol more stuff to verify is working correctly in your system, and more reason to not update when things are good.

I'm also very concerned about sync since Marco did those videos and the track with realtime plugins was off by a sample or three. Part of it was latency compensation and part was he was using spdif inputs.

So as much as I want to avoid dedicated DSP hardware, these concerns have me a bit, concerned lol.

I basically want a pcie unit with just analog i/o, a computer system that can handle entire sessions at the same buffer and at least 96k sample rate. Then it just comes down to the daw syncing properly tracks with plugins while recording.

It amazes me how niave I've been about some of this stuff. And I did the hardware monitoring and "cue effects" DSP workaround for a long time, and it never felt immediate like using a digital or analog console, or a pthd system.

I learned a ton using the 2 daw hybrid system.

I learned a ton with my hybrid 2 DAW system. Most of what consisted in how bogus expensive mastering hardware is.
And how important the interface matched to the converter plays a role in stability .

Warren Heart did a demo of…

Warren Heart did a demo of iZotope Ozone's mastering match feature where the Ai looks at the reference song and tweaks your song trying to get it similar. He used Piper Paynes master as the reference, and then iZotope did it's thing and applied settings to the un-mastered version of the same song. Then he A/B'd them and it was close, really really close with no additional tweaking.

That pretty much sold me on where ozone was at and it's certainly good enough for my needs. It would still be fun to send some stuff out to a real ME, but that demo really gave me confidence about itb mastering. Plus there's alot of ME doing itb masters too, despite having the hardware.

In reply to Warren Heart did a demo of… by kmetal

If you can find that video, please add it to the topic!

After looking thru the…

After looking thru the Manual, it looks like samplitude has several options in their hybrid buffer system. You can set it so your record enabled track is heard thru the speakers with inserts, auxes and the master bus effects. Or you just the inserts but no auxes or master bus. Then there's the typical hardware monitoring option.

What I'm curious about is if when monitoring the auxes and master bus live, if all auxes in the session are calculated with the realtime buffer, or if it's only the auxes that the live track is sending to. This could be a huge difference in CPU usage if for example your just sending a last minute vocal overdub to a reverb and delay, but the audio engine is calculating all auxes in the session in realtime.

Magix is pretty smart so I wouldn't be surprised if only the auxes the live tracking is using get calculated with the realtime buffer. I might email them to see how this works.

I think I'm also going to look into how other programs are handling this.

For the sake of references…

For the sake of references on this, (and because I love using this new feature :) We have a related topic on Samplitude - Buffer (Optimal) Settings?  here

Found it! starts around 11…

Found it! starts around 11:45. He messes with a few things over the course of the video, so the first A/B isn't good as it gets. Also it wasn't Piper Payne, it was Emily Lazar who did the official master.

In reply to Found it! starts around 11… by kmetal

Here is the official…

Cool gonna check out the…

Cool gonna check out the Samp forum. Curious to hear your impression of the Ozone demo.

We talked about this…

We talked about this happening 10 years ago. Now it’s happening.
Excellent video. I'm really starting to like Ozone.

Yeah it's pretty gnarly what…

Yeah it's pretty gnarly what the software can do. Been a fan of ozone for quite some time.