Here's the reposted item on how you can record grand pianos - I'll explain what made me do it. It's quite common to record what I've always called 'natural acoustic' recordings. Solo singers of all kinds, or duos, small ensembles or choirs - often in really nice venues with great acoustics and it's the sort of thing that seems to encourage stereo recording techniques. We get excited by X/Y, rarely use A/B and more and then people explore Blumlein stereo and even M/S techniques. A few experiment with the spacing and the angles and discover ORTF and other clever systems. Even Decca Trees, with and without outriggers pop up from time to time. The real problem with all of these is that very often, there will be a piano providing the accompaniment and while the singing is often captured, along with the ambience, very well - the pianos struggle.

I often cheat - miking the piano as a separate source and then blend it in, but that again is a new skill to be learned. I came up with the idea of recording my friend's Yamaha, in his home - in a very ordinary room, certainly not that suitable for recording. The videos I've been doing feature comparisons, so the viewer can hear the differences in brands, positions and techniques, and very often, these videos show that cost is very much not the solution to better sound. I did a video the other day comparing AKG vintage 451 SDC mics to Samson C01 mics and the conclusion (for me) was that the AKGs were smoother and fuller, while the Samsons were a bit honky in certain placements. I used these two again, but compared them with a pair of AKG 414s, in fig-8 mode, crossed at 90 degrees making a Blumlein stereo setup - normally considered unsuitable in a small square room - but then putting two SDCs on booms over the strings. Normally people always seem to promote the idea this is not a suitable setup for realism and more traditional music, played properly by a decent pianist. I did the recordings and then also plugged in a Neumann 103 which I tried in loads of common and uncommon positions. Interestingly, the results of this single mic were not remotely what I expected - so much so that I repeated it with just one mic plugged in to make sure I really was hearing this properly. Have a listen and see what you think - next time you record in a church or concert hall, you might be able to steal something from the video.

Your videos are helping me organize and giving me ideas on how to develop additional ways to expand video content ...

Could you include audio clips within each of your RO videos?  I'm thinking wav or MP3 clips included in videos like this would be an excellent (more in depth) way to expand audio with video content together!

When it comes to studying audio...  I much prefer to listen with my ears with the option to quickly flip between very short loops of various clips on a player/ transport.

We never see audio clips with youtube videos, likely because youtube is only a "video format" and imho, post result, not sound engineering. This imho is a much needed and missing section to audio/ video content on youtube, and something we can do better.

I think it's possible - the…

In reply to Wonderful video again! Your… by audiokid

I think it's possible - the only snag would be the process of preparing them - the video edit is just the two or three video tracks - that sometimes run for up to 45 minutes and then there is a matching audio track section - again from 1 to 4 tracks. I'd need to go back to the edit, and make a note of which audio file is coming from each microphone, then find that file and the other and then the others. That's probably not going to be a quick project. Mainly because each of the episodes is a single folder, but with common file names - track1 0001 then track 2 0002 - so I'd need to duplicate them, rename the copies and then move them. I'd end up with an awful lot of files that are quite long and then find the relevant takes - OR - I could export the .wav files from the edit directly, rendering out the audio only.

Rendering out from the edit might be more workable? It takes about 4 hours to shoot and edit the typical 15 minute video. Would you want 'collected' examples from each mic? So examples of each collated from different videos? I'm not quite sure a collection of 414 clips is that useful, because the context might get lost without the video. In the piano one for example - would the idea be to have the beginning to end track on the three different microphone pairs, rather than switch between them, leaving the switching for the listener from complete tracks. What about levels? Some of the tracks are not at any specific level, and were adjusted in the video edit to match between swaps. As stand alone tracks they'd need to be adjusted again for optimum - maybe just normalised, but normalised at what point - a loud section and a quiet section normalised in the full length or split into the quiet and louder clips and each normalised separately?

That's a lot of questions!

Would you want 'collected'…

Would you want 'collected' examples from each mic?

yes, that would be cool.

we can keep audio tracks together with videos, and visa versa and also alone as reference etc.

As a group, we will figure it out! Anything you are comfortable with… please do …  we’ll evolve with it all. Fun!
😊

I've got a project on the go…

In reply to Would you want 'collected'… by audiokid

I've got a project on the go that could work for a video. One of my old clients - a track and then guide vocals, which he then replaces with his own voice using the stems as a guide - so it would be my voice and I'm not really a singer, but instead of just one mic, I could put out a number of them and make some clips available on here? I need to check that he's OK with this as it's his project, not mine, but it should be OK I think. Maybe I could also put a rough mix of the stems up too, so people could even try each mic against the track? Perhaps that's a bit optimistic - but I'll see if it is doable.

Well - I started today, but…

Well - I started today, but ran out of time when a rush job arrived - some studio let somebody down - a wedding this weekend, and the promised 'classical mashup' of a hymn and Pachebel's Canon didn't arrive - could I do it straight away? Anyway - a start has been made - I decided to retire the Samson mics - the C01 and C01, when I undid a case looking for something and found a couple of Oktava MK-319s and an EV 320! So here's the start. 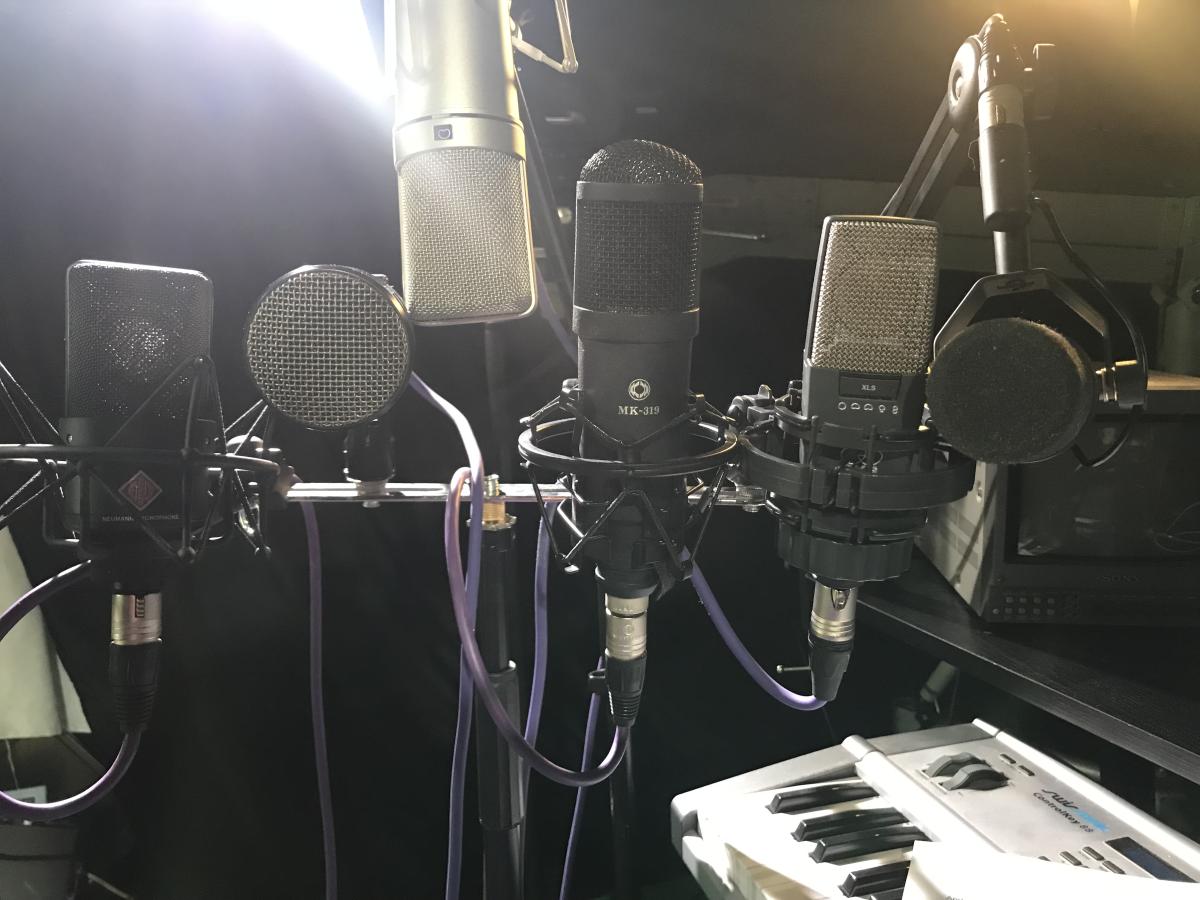 Thanks for this I will have a listen.

Thanks for this I will have a listen.

I listened again and the results are exactly as they happened. Perhaps you missed the point? The piece features some very loud bits and some very quiet sections, so the microphones respond in different ways, and the 50 year old 451s are noisy - actually slightly different on every one of the 4 I have. Again, so are the cheap Samsons, so for the examples, all I did was bring the levels up to a common area, and their noise does indeed increase. The ending, for example hardly reads on the meters, so the piano is much closer to the noise floor. It reveals that the 414 and TLM103 appear to be the quietest. Actually, if the 451 pair was included at the level a CD would be mastered to, the noise is hardly evident unless you listen at very high levels. I think, on balance, that the cheap Samson's did a pretty good job for the price. Remember the point of comparisons like this is to expose problem areas, and help people decide if spending two grand vs less than a hundred is sensible. I worried a little when I read your post, but on reviewing it I'm happy that what you heard was correct, and intentional - the loud, medium and quiet sections each repeated at the same level, totally out of context, of course - but that was the intention. You can cross the 451 (not 251) and Samson's off your shopping list because that is what they recorded like in this piece of music. They could be great for something else (and are, to be honest). Paul