Nice looking gizmo with many features. Am I selling any of my ge

Nice looking gizmo with many features. Am I selling any of my gear for this... No !! ;)
If the preamps are of any fair quality for the price, It could be an alternative for Focusrite and Presonus entry level interfaces for those who want to learn.

pcrecord, post: 428436, member: 46460 wrote: Nice looking gizmo with many features. Am I selling any of my gear for this... No !! ;)
If the preamps are of any fair quality for the price, It could be an alternative for Focusrite and Presonus entry level interfaces for those who want to learn.

I get you Kurt, it may indeed be the future of music.. Saddly, if it's so affordable. How on earth anyone would pay me to record their album.. IF all musician starts to record themself, it'll sign the end of our craft..:(

pcrecord, post: 428440, member: 46460 wrote: I get you Kurt, it may indeed be the future of music.. Saddly, if it's so affordable. How on earth anyone would pay me to record their album.. IF all musician starts to record themself, it'll sign the end of our craft..:(

well that bus left the station about fifteen years ago, at least for me when i was sitting on $70,000 worth of gear and 3000 sq feet and a $2K nut every month, asking myself, "how can i compete with a guy with a computer in his garage?" and the sh*t keeps rolling downhill. if you are still working in today's business environment i think you don't have anything to worry about for the moment. but it's my guess it's going to get to a point where no one will pay for it except at the highest levels. all while the expense of operation keeps accelerating.

there will always be a need for rooms that can track drums, bands live, large ensembles and film scores. it's the small boutique rooms and mid sized rooms that are being clobbered. .... (there's an interesting interview with Allen Sides in the last TapeOP where he talks about the future of commercial recording.)

what catches my eye is the AG03 /AG06 both address a wide sector of the market. it's appeal seems almost universal.

as well as a primary device for the beginner or a small home studio enthusiast, i see this as a very cool tool for pros on the move, in hotel rooms or on a plane between studio dates. especially with an iPad. it's perfect for gaming or Podcasting and it's a Yamaha. not some thingie from "Derringer" .... lol.

they claim it has decent pre amps but i don't have high expectations ... not with 5 volt rails lol. probably good enough for line / make up for a passive summer though. but the Cirrus Logic converters should be reasonably decent. are these are similar to the converters used in the Adat HD recorders? i don't expect the performance of uber converters but i do wonder, at higher sample rates do the differences begin to narrow? Yamaha has a deep legacy to draw upon and it seems they have gone to the well on this one. this may be a real sleeper product. "THE HOLY PAIL!" :D

the operation seems so simple. i'm still not clear but i do think you can print effects and compression which would be cool. and you get a free DAW .... or for $40 you can buy MixBus .... i was researching it today and MixBus is working on a IOS app .... how cool would that be? MixBus on an iPad ?

The AG's compact, intuitive design concept combines studio-quality sound with state-of-the-art Yamaha DSP and versatile connectivity, for a fast and easy, high-quality tool for users of varying musical and non-musical pursuits. Both AG models come equipped with D-PRE mic preamps which were originally designed by Yamaha for use in high-end recording gear, and are capable of capturing the distinctive nuances of vocal and instrumental performances with the flawless fidelity of the AG's high-resolution 192kHz/24bit sound. The AG also features an intelligent LOOPBACK function that allows users to broadcast their musical, or non-musical content live online along with backing tracks or additional audio from PC or Mac computers or an iPad. With flexible connectivity, phantom power and a Hi-Z switchable input, users can connect a wide range of instruments and microphones such as guitars, bass, synthesizers, high-quality condenser mics and headsets, directly into the AG. Onboard 1-TOUCH DSP instantly adds optimally set COMP/EQ and EFFECT * and, for more precise control of these settings, the multi-platform AG DSP Controller software (download) allows users to access and edit the compressor, EQ, high-pass filter, reverb, and amp simulator parameters. The AG also comes bundled with CUBASE AI music production software (download) for Mac and Windows computers, or for iPad applications, an optional CUBASIS DAW app is available. USB bus power allows users to instantly configure a compact yet powerful studio setup with a single connection to their computer, or using a mobile battery with an iPad.
*The AG06 also features AMP SIM for an authentic, warm tube amp guitar sound

* iPad is a trademark of Apple Inc., registered in the U.S. and other countries.
* Steinberg, Cubase, and Cubasis are registered trademarks of Steinberg Media Technologies GmbH.


Visit http://www.yamahaproaudio.com for the latest news and information.

Yamaha rules! One of the few mega corps that's managed to mainta

Yamaha rules! One of the few mega corps that's managed to maintain product integrity at all price points, and be competitive in every facet.

Those little mg? mixers were always decent, although you don't see a lot of them. 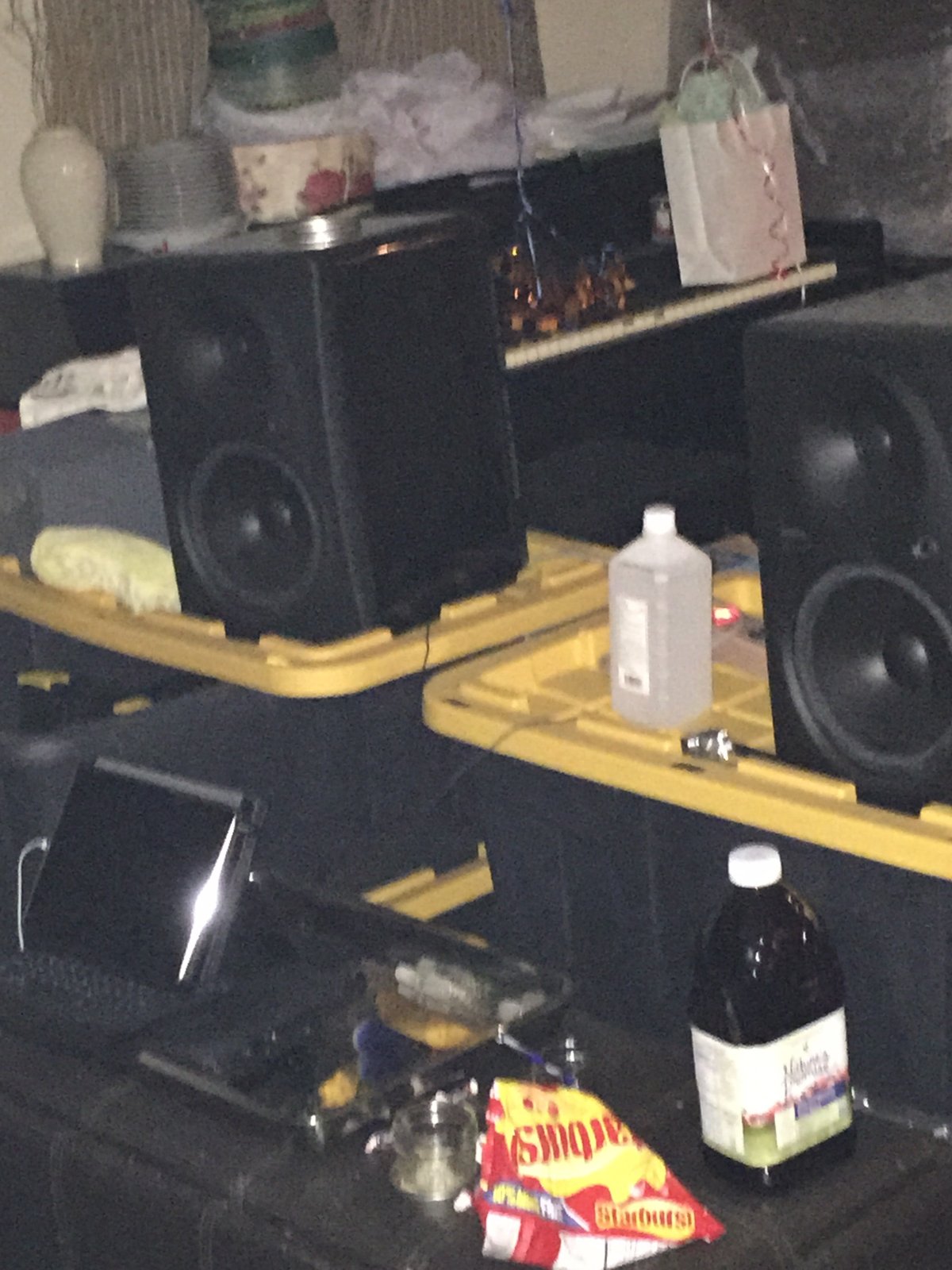 Lol because life happens and this has been my 'personal' setup of late. Barring the cheapo y cable, I enjoy it's simplicity. I haven't used a home cpu in about a year and a half. But barring life circumstance that necessitate that in my life, I wouldn't complain. The built in mics in the i stuff is just as good as the zoom and Tascam for the basic purpose, add garage band for free or whatever more capable app, and it takes it to the next level. In all fairness am taking my punches as an up and comer haven't slept in my own bed in 2 years. Lmao. Still I don't miss my pro fools setup, or laptop at all. Don't know about long term performance, but these things run so smooth. It's all about having it do just one thing. Like those old mackie HDR recorders. Like 366mhz or something. Still don't skip on 24trks.

Touch screen sucks for mixing if your used to knobs and faders, but editing. Oh man it's gonna get so much less tedious and smoother. Loosing the kinda word processer ish feel behind in the dust. No more annoying client pointing at the screen and it not do anything. Lol edit yourself man! How many times have it gone back and forth 'not that one! No, that one. Which one? That one? Right there!? Yes! No, I mean, that's not the one...'
I am pumped! I literally just had to move a 40lb 4U creation station that's a web machine now. Way way way to much work.

I actually thought of you guys when inwa doing it. I was like how'd those dude do it. Isn't after night with huge 80-90s rigs!? Wtf?! We have it easy in that reguard.

what DAW program are you running on the iPad??

what DAW program are you running on the iPad??

I use garage band. There's a couple out there that are in the 1

I use garage band. There's a couple out there that are in the 10-$40 range. But gb gives me a click, grid, basic editing, and I don't even have to touch a gain knob. Not sure about multi tracking, and there's no mixer or plug-insper say. Good enough for an audio idea pad.
I'm putting together a backup system and samplitide/dp/pt based computer, likely a UA interface, with a killer dac pair, and something reasonable on the frontside. Eventually (yawn)...

Fwiw I thought tablets were so lame until it was given to me.