Not sure if this counts as pro gear, but it seemed the most appropriate forum.

I've had this unit for some time now, as my second 8 channels in my setup.
Over the last 18 months, I've had all the tubes go bad three times.
I chalked the first two times to having removed it from the rack and traveled with it, but...
This most recent set has lived in the rack, and just like before, all at once, all the tubes go bad - bad as in presenting high-frequency overtones/distortion on every channel, regardless of gain settings.
Any ideas as to why this is (keeps) happening? The only guess I have to this point is that the unit/rack get pretty hot, but not sure that would be it?

Where are you buying tubes? How much airspace is around the unit? These are the first points of the issue. Third would then become the inner workings and a possible failure happening with the power supply to the tubes.

This may indicate that it's likely to be something other than the individual valves (tubes), probably power supply trouble of some sort. Low heater volts or lack of regulation in the HT rails are the sort of things that give distortion problems over all channels.

If you have the neccessary gear, I would measure the stability of the heater voltages and also the HT+ line. I don't know that ART product, but on a lot of these valve pre-amps, the heaters are d.c. fed, full-wave rectified from a separate transformer winding and roughly smoothed. I have seen one diode in a FW rectifier go bad in this type of scheme, resulting in reduced average voltage to the valve heaters. When this happened, it was also indicated by slightly increased hum level in the audio output when listened to with no signal input.

I agree with Boswell on this. The fact that all valves go bad in a short time indicates there is something amiss. As Davedog said, make sure the unit has good ventilation and isn't sitting directly above a PA in the rack and other such things that could cause overheating. Another point to check is that the incoming mains voltage is correct for the unit. Say if the unit is designed for 110 Vac and the supply is 120 Vac then, with a simple transformer for heater supply, the voltage could be almost 10% higher than designed. If the heater supply voltage gets nearer to 7V rather than the usual 6.3V the heaters are designed for, then the emission of the valves could fall off prematurely and cause the problems you describe.

Sadly there are so many things that could cause this and if the stability of the audio design is in any way marginal, any fall off in the valve characteristics could add to the problems. Like Boswell, I'm not familiar with the ART design so it's difficult to advise further. If you're happy to measure the heater voltages and they are high then you could work out the total heater current and add a suitable series dropping resistor, if the voltage is low then check any rectifiers as Boswell suggested.

If you're not sure about opening up the unit just ask for some more pointers.

One thing for sure is that the valves should not ALL be going bad in just 6 months on average!

Bos and MrEase's replies reflect just a few more reasons why I dig this place so much. RO is an incredible knowledge bank.

DonnyThompson, post: 419477, member: 46114 wrote: Bos and MrEase's replies reflect just a few more reasons why I dig this place so much. RO is an incredible knowledge bank.

I've just seen that it may be possible to get schematics from ART. In their FAQ section they mention this. I don't know if this will be useful for you but I'm sure it would help Boswell or me if you need further help.

Thanks, fellas. Unfortunately the tech side is a little over my head, but I do have someone here that is more knowledgeable, so I'll make sure he sees this.
A few updates: I replaced all the tubes Tuesday 9/23 (4 tubes, two channels per tube) and ran into the same issue Sunday 9/28. So there is likely something else causing failure.
I've attached a near shot of the unit in the rack, and a far one. The tubes are cheap (not spending good money on tubes until I sort this out), and the unit gets pretty hot. FWIW, most of the units creating any real heat are in the top rack (preamps), while the bottom rack (comps) produces very little. This could be an issue, but the rate of failure is increasing - the last one happening pretty much upon first use. 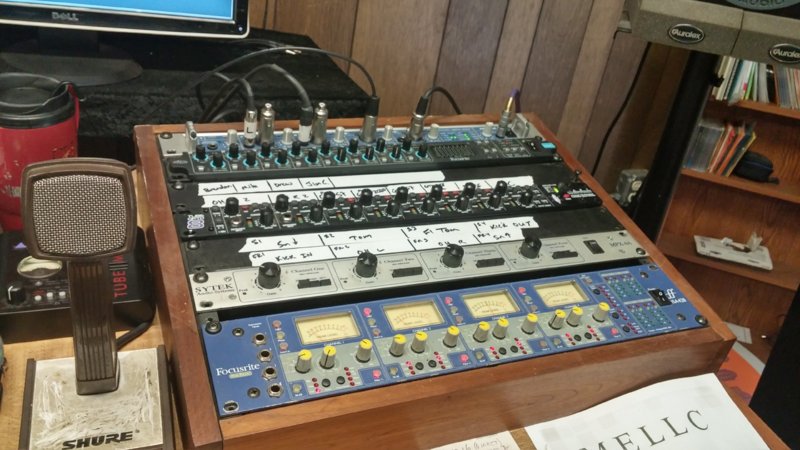 I would also like to include some audio comparing the ART to the Focusrite - a 1k test tone and some direct electric guitar, to demonstrate audibly what is happening. Coming shortly.

If you want to examine the individual files:
https://www.dropbox.com/sh/7p794b96kbgxgs3/AAAOQakE5MGqpCMRqznZw79pa?dl=0

the way those things are packed into that rack i would bet the art is overheating. try pulling it out of that rack and see if it still burns up a tube.

Kurt beat me to it. You don't have much spacing for ventilation...

The potential for overheating is definitely the first issue I need to address.
Although I must note that probably 50% of all the heat in the enclosure comes from the ART, & that it hasn't been an issue but recently (especially the last couple of weeks).
The confounding thing to me is the acceleration of failure rate- roughly 12mos, 6 mos, and then a matter of weeks or even single usage. This is why I'm going to have the unit examined by my tech guy.

So a few final questions until he can take a look:
Thoughts on the acceleration of failure? (Maybe the issues that Bos & Ease suggested?)
Solutions to reduce heat? Would a fan beneath the rack pulling air away be sufficient?

Thanks again for all the help, everyone. I've learned more about recording and gear from this site than probably every other resource combined!

According to the specs, ART claims that "the unit can be housed next to other gear in close proximity" - although "close proximity " is a very subjective description, and they don't give an indication of what that distance actually translates to. For example, they don't say "keep this unit at least ___ inches awat from other devices". They do recommend NOT racking it next to power amps, other tube gear or any other units that get hot.

A fan would certainly help, but you're risking quite a bit of noise during recording. If it were me, I would look at getting that ART out of a rack entirely, and place it somewhere in your studio as as a standalone, or in it's own rack where other cooler running devices are located (patch bays, digital gear, etc). I don't believe you would need a fan as long as it's not racked closed to other devices that also get hot.

The specs also mention that the tubes are 12ax7's, so replacing them shouldn't be too difficult - or expensive.

Tubes fail in varying degrees - Some fail fast, others fail over time, some give symptoms such as "microphonic" noise, ( this is where you can tap the tube, or in some extreme cases, even speak towards the tube, and the tube will reproduce the impulse). Some never give any pre-warning symptoms at all, until they just fail.

Reading through some material - a very quick perusal - a few sources mentioned that you can "dial out" the tube stage, at which point the pre's become fully solid state (??)... I don't know if this is true or not ... if it is, you might try sending signal to the pre's to see if they work, at what range they clip, and how fast they clip upon hot settings.

Boswell would be the guy to tell you how to best diagnose if this was an actual tube-related issue, or if it was perhaps something else in the channel, like the Class A circuit, input or outputs, etc.

But for sure, regardless of the issue at hand, I wouldn't look at putting it back into a crowded rack that houses other gear that gives off heat.

If the problem was solely caused by heat this would have been a problem from day one when the unit went into the rack. It does not explain the ever decreasing lifetime of the tubes. There must be another problem which could also have been caused by excess heat but I do not anticipate that adding a fan now will correct the problem without further investigation.

I'm sorry but there are so many possible reasons for the failure it's almost impossible to "crystal ball" the problem especially with no schematics. What I would say is don't even power the unit on until it has been checked out. You will have to rely on your tech guy so I hope he's worth his salt! Hopefully he will be able to identify if heat has been a contributing factor to the problem and you should use this info to determine if you need to improve airflow around the unit when it goes back in to your rig. Good luck.

Update - I've replaced the tubes, and haven't had the issue since.
Probably a bad batch of tubes, although I'm working a re-racking everything to address heat and maintain logical consistency.

Thanks, everyone!
Somehow my notifications were't working right, so i didn't see these until now...

@soapfloats Sorry to intercede on your thread, but I just had a surprise when I saw Sytek preamps in your rack.
I've been reseaching them for a couple of weeks as possible additions to my preamps.
Could you tell me more about them, the website seems to be frozen in time for years and I can't find good demo or any discussions younger than 2009
When did you buy it and how does it compares to the ISA preamps you have ? (I also have ISAs) ;)