I thought I'd share a little job I'm doing. Female opera singer needed some tracks recording for promotion. Hungarian singer, living in the UK with her pianist in Boston USA. A track recorded on an iPad in the US that works the wrong way around. For those not having bumped into classical recording, the singers work hard with their pianist, putting in tempo changes, small pauses and in this kind of music, the actual singing gets broken up with the pianist linking the verses together. Normally the pianist follows the singer, but with a track, they had to agree the pushes and pulls and then the singer has to follow the piano - NOT - the way they train in their studies. Then the recording turns into a video and audio recording. First snag is that the piano recording from the states was a fairly low quality mp3. I got the pianist to record it via MIDI and let me have the file. What I got was a GarageBand file! I don't use this, but stuck it on my MacBook. The files wouldn't load as they were IoS versions for phones and iPads, but I got it eventually into garage band to discover audio, not MIDI. Then I discovered garage band uses MIDI but doesn't have an export function. You can, however save the file as a loop, and this produces an .aif file, which you can then import into a small app (Google find it with a search for aif to midi converter search). Then I discovered it's 32bit only and of course my Mac is 64 bit only now. The mp3 was a very poor quality piano sound from garage band, so I desperately needed to get the MIDI and make it work on a decent sample set. I did in the end get the MIDI files, and then picked a suitable piano. Then I discovered the pianist's ebb and flow of tempo hadn't been recorded in the MIDI data, so it went out of sync. The cure, a manual tempo track adjustment, bar by bar using the waveform of the mp3, stretching and shrinking the MIDI tempo to fit.

I could not get the usual nice sounding churches close to me due to Covid concerns and rules, but found a smaller parish church with nice acoustics about 30 miles away with a friendly and understanding vicar.

Three cameras, some decent video lights, and a couple of zooms. One to playback the tracks into one in-ear hidden under the singers long hair, with a volume control clipped to the rear of her dress out of view. Mic wise, a simple mono setup, the usual one metre-ish distant. I selected one of my AKG 414s, a friendly classical mic, but I also thought I'd give a ribbon a try. I had a sample Chinese ribbon a couple of years ago and didn't find a use for it, but I wondered what it would work like. Difficult to assess there, so I used this on one side and the 414 on the other and picked one afterwards. The ribbon was actually rather lovely. I wish I'd bought two so I had a stereo pair. The choice back in the studio was a no brainer, the AKG was clean and would have needed EQ badly - the ribbon was good before doing anything and I just added a smalll boost at 1K or so, but just a touch. Sync for the video was provided by recording one channel of the playback zoom into channel three on the other. This worked really well. There's quite a bit of editing to do. As in open piece it was in German, I didn't spot she got the words wrong! She did, so we need to do some repairs there. We've had a few topics on opera singing recently, so I thought this report might be interesting to some folk here. There's a small audio clip and some pics. 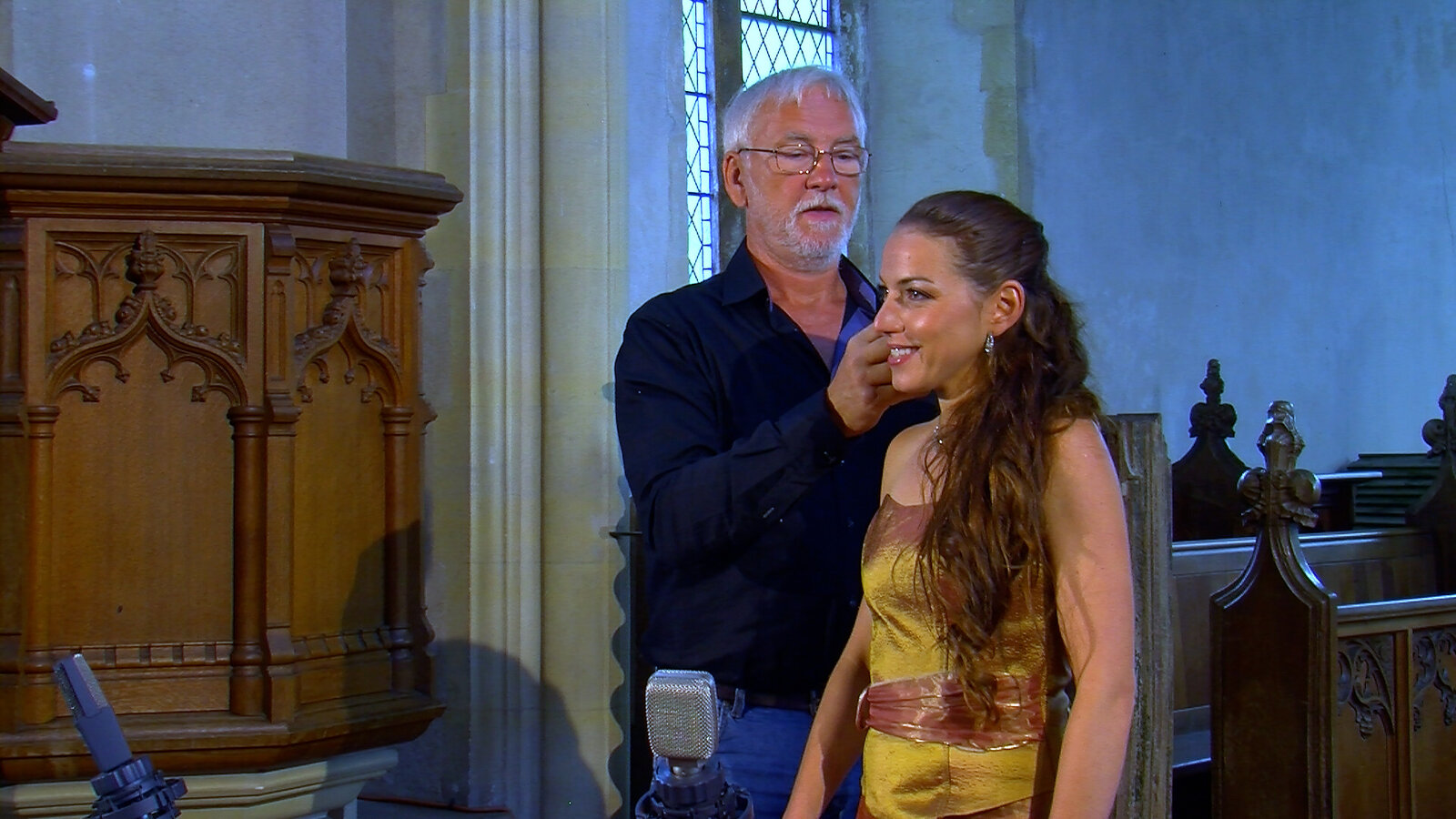 @paulears you are glutton for punishment:). Well done, I hope yo

I quite like this stuff. Music outside my comfort zone is always

Very nice recording, amazing how you had to fight so much to get

paulears Thu, 07/09/2020 - 05:25
The thing I worked out long ago is that serious musicians of this type - those that studied their subject at quite a high level understand every nuance of their performance, but don't hear the other contributions in the same way. A lo-fi mp3 piano, that clearly wasn't remotely realistic and responded poorly to MIDI velocity was not noticed, yet a small mispronunciation in a German phrase was a killer! I like these people though, the only thing they are interested in is the music!

Congrats, Paul. I'm not sure I wouldn't have abandoned that proj

cyrano Fri, 07/10/2020 - 07:54
Congrats, Paul. I'm not sure I wouldn't have abandoned that project.
I agree that professional classical musicians are easier to work with than popular ones. From simple things like showing up on time to patience.

They are also very tough on their own performances. Yesterday we

paulears Mon, 07/13/2020 - 02:14
They are also very tough on their own performances. Yesterday we spent 5 hours in the studio selecting best takes, so I introduced her to comping. Something she'd never heard of. We went through the first piece, and in between each phrase or line, I stopped and asked her for a colour - red for dump it!! through to dark green for very good, and she soon got the hang of this. A few were tricky with the beginning great, then a technical slip - maybe an indistinct 'rrr' on the start of a syllable - that kind of thing, so I had a try with snipping, and then a small crossfade and it worked like magic. She really got into it, and we speeded up doing each take in this way. Once all tracks were completely coloured, we dumped everything other than greens and selected the best - like you do with pop and rock, and they became pink! On one, the phrasing was really beautiful but she couldn't pink it because of the slight sharpness of one short note. So I showed her the Cubase pitch correct screen, and nudged it back up to pink. Opera has lots of quite wild virato in some places, and Cubase actually handles this reall well - som,ething I guessed it wouldn't - so I have one really happy singer. The second track rattled through in about half the time, so in just under five hours we've done two pieces. We also fixed a tiny number of piano key 'miss-hits', where the player accidentaly brushes a black note, aiming for the white note next door. The pianist in Boston, USA loves the result, so I'm going to repeat this process for more, I think. Funny how younger classical performers can embrace new ways of doing a pretty disciplined historic process. They happily play Brahms and Strauss from ipad screens nowadays, so as many have electric pianos for headphone practice, I'm surprised recording MIDI from them they seem to have missed.

I've attached a short clip of one of the quiet sections - mainly because we often have people worried about squeezing the last dB on the meters. This bit hardly tickles the meters at the start, which is common for this kind of music.

Sorry I'm probably boring the pants of many of you - and the genre is not exactly exciting, but I have learned a lot from applying contemporary techniques to this kind of music style, and I'm going to pitch for more of it - something I've not been keen to do before lockdown, but it's hard work, but oddly quite satisfying. I do feel a bit er, educationally lacking though. I have a Hungarian opera singer, singing in German, to somebody who finds English a challenge sometimes! She's also learned some new words for her vocabulary too - wobbles, thin, EQ, comping, pitch correction and most of all - editing. I've realised that much of what they do is stamina, holding back for the really loud, high, difficult bit sort of impacts on your voice when you can actually do both well with editing.