I've recently moved into a new place, and I've got a loft room as space for my home studio. It's far from ideal, but it's the only plausible space I've got.

Being a loft room, there are stairs leading up to it from below, rather than there being a door in the wall like most rooms. My issue is that there is a solid wood banister/handrail around these stairs, which is a pretty large obstruction in the room. It isn't like the steel ones you see in public parks, where the middle part is empty - these are solid boards of wood the entire way down to the ground. I'm renting, and so am unable to do anything about this, and will have to place my speakers around it.

So, given these constraints, where is the best place to put my monitors? These are Kali LP-6s, which I have speaker stands for. I don't have any acoustic treatment up at the moment (though I know this room really needs it), I'm holding off on those until I've decided on final speaker placement.

As I feel like I've probably not described the room accurately enough, I've drawn up a crude diagram showing the size of it: 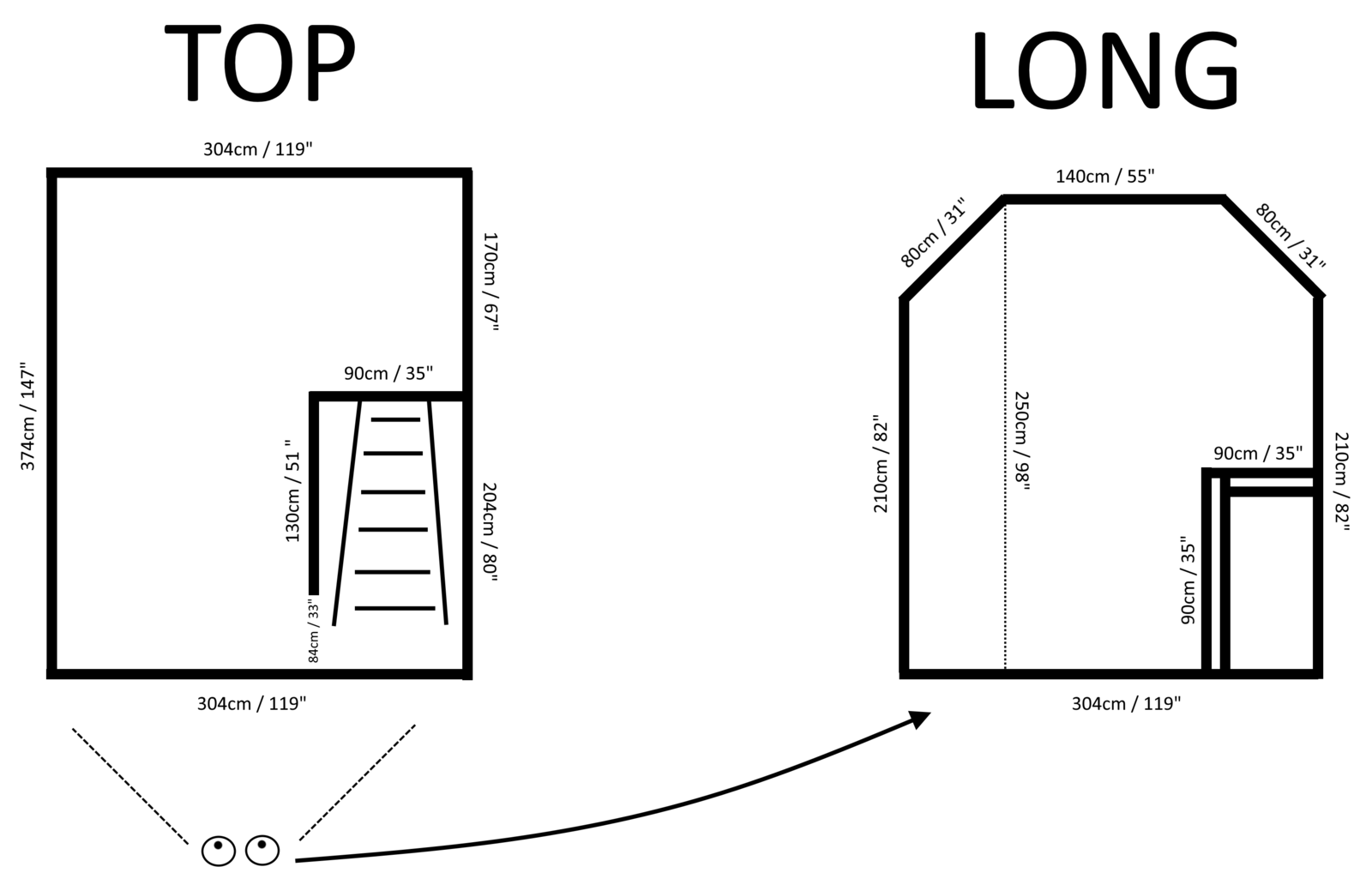 I'm looking for advice on where best to place my monitors for optimal sound quality. I'm not too fussed about ergonomics, and everything else in the room can (and likely will) be moved around based on where the monitors sit - with the exception of this damned banister.

I'm not that clued up on acoustics but I've read up on monitor placement and have learned about things like the rule of thirds, but I've not been able to figure out what would be the best placement for my specific scenario.

Any and all suggestions gratefully received!

with the dimensions you have there's really no benefit in any placement. where ever you set up you're still dealing with the worse possible scenario in terms of ceiling height. no matter what you do, a room with 8 /9 foot ceilings is going to be seriously compromised. honestly there's no way to make an accurate monitoring space with an 8 /9 foot ceiling. still, lots of people feel they have no alternative.

so if you must, i would ignore the stairwell and set up against the front wall with the stairwell behind you. be sure to set up symmetrically with your listening position approximately 1/3 out into the room. low frequency below 100 Hz will always be an issue in small rooms and anything that will absorb those lows will be 2 feet thick and require placement all over the room making the space even smaller ..... think dog chasing it's tail. in a situation like that it's easier to limit the amount of lo freq energy introduced into the room than to try to trap it for 30 Hz. imo, a small speaker system rolling off around 40 Hz would be a best choice (your system will be perfect for this application) .

i would put up 2" fiberglass panel absorbers on the front wall behind the speakers and on the side at least to your monitoring position in the room. i would also put fiberglass panels on the whole ceiling. the goal is make the small room boundaries disappear as much as possible, not to trap bass. after that decide what to do about bass traps.

real quadratic diffusion along the rear wall or between the speakers on the front wall is always a great addition if you can afford it. there are also many ways to achieve diffusion on the cheap albeit not as effective as quadratics if you are inventive. anything with mass that can scatter reflective energy works. book cases, equipment racks, rock or shingles, corrugated fiberglass panels on higher frequencies (to a degree).

the open stairwell may actually be a saving grace as openings in a room can vent off excess sound pressure. also, be aware that sound wave like to travel down hill. in a residential setting, close downstairs neighbors may have an issue.

Thanks for your response Kurt. So you'd say that putting my moni

Thanks for your response Kurt. So you'd say that putting my monitors a third of the way into the room (which would mean the right monitor would be right up against the banister) would be better than putting the monitors directly against the wall and using a corrective EQ to try and tame the exaggerated bass? My concern with moving too close to the banister is that it would either cause extra reflections, or the stairwell would absorb a load of the right monitor's sound, affecting the stereo image.

Apologies if I'm asking stupid questions, I'm quite new to all of this and want to make the best out of what I have - this is the first time I've been able to dedicate an entire room to my audio hobby, subpar as that room may be.

your listening position should be 1/3rd of the way into the room. (4-5 feet) place fiberglass panels on the banister kick wall or anywhere else you are concerned about early reflections.

i never opt for corrective eq. imo it makes for more problems than it solves. your monitors are ported on the front so low end reflections off the front wall won't be a problem if you put up absorption behind them.

nothing is going to be perfect in a room that small, staircase or not. what you want is to make it the best it can be and the shortest path to that result is to not do any damage with treatments, placement or "corrective eq". the stairwell will act as a means to vent off excessive pressure. that is actually one of the good things you have going for you in that space. embrace it. another up side is the roof line intrusion which actually eliminates 4 trihedral corners. the bad side to that is it forces you to only fire the room along it's length. if you try to fire across the width of the room you will be firing into compression which is a huge no-no.