Hi, I'm kind of new to this. I am recording audio and getting a constant sort of noise. I've included a sample where the noise has been recorded by itself.

I'm currently running a setup where the audio comes from a wireless Shure microphone receiver, to a live mixing console. A Presonus StudioLive 32.4.2AI mixing console. The console is used for live sound mixing.

This console also sends a main output (via 6.5mm jack) to a secondary smaller mixer. A Behringer XENYX 502 mixer. This mixer is used to control volume for recording, as the main console can't seem to control for recording and live at the same time (with the outputs available for me to use). And if I have the volume from the main mixer go directly to camera, it is far too high a signal.

This smaller mixer receives from the main mixer and outputs to a camera (via 6.5mm output from mixer / xlr input to camera), which records the audio and video.

But upon reviewing the recordings, there is this terrible noise. I have no idea what it could be.

Any idea what this noise could be?

It isn't in the live mix, I don't believe it to be room noise because of the setup, and the camera itself can record audio fine otherwise (via video mic etc.).

Is it perhaps the smaller mixer not being able to handle the amount of signal input well enough? Or perhaps some other sort of electrical issue?

I have no idea.

Any ideas or possible remedies?

Any help would be appreciated.

Wireless systems are most prone to RF interference

I am also an amateur in music production, but I have a long history with electronics in general. That rapid pulsing noise in your recordings is no doubt a Radio Frequency being emitted from a device within "earshot" of your wireless transmitter and/or receiver. You should start slowly unplugging one thing at a time in your house - if that is feasible - while checking for that pulsing noise. Although sometimes the source is coming from outside your house or building and there isn't much you can do, besides trying to find a way to shield your transmitter and receiver. But that can become a rabbit hole pretty quickly. If or when you find the source and the noise disappears after unplugging the device - you have a couple of options for eliminating it from recordings. You can remember to unplug the offending device when you record... Or you can invest in large ferrite rings, and wrap the power cord of any and all offending devices through the ferrite rings, before plugging them back in. This will dampen the radio frequency being emitted and then picked up in your receiver.

If you are handy and like to research, I suggest learning about Radio Frequency Interference on YouTube to get a better grasp on it. But if you are less handy or less than confident in how to approach this, let me know and I will try to ask you some more questions to figure out the best way to help you.

It sounds like a 60hz sine wave, which is the frequency nearly all modern electronic equipment uses in their power supply. And the vast majority of modern appliances, stereos, power tools, TVs, etc, etc, leak tons of RF and wreak havoc on wireless receivers and transmitters of all sorts. That is unless you work in a modern studio of some sort, where a technician has spent countless hours hunting down and eliminating all the sources of interference.

So for most newbies to sound production, who happen to purchase a wireless mic - with no training or understanding in the intricacies of radio -  we are at a loss when the mysterious noise shows up. And we understandably tend to think the product we paid good money for is malfunctioning. So please do not feel bad for not having any clue at first. I spent a lot of hours being confused and frustrated when I started learning these things myself. :)

It's good news that it's a 60hz sine wave. That means it's not likely to be coming from outside your house given how strong the signal is. just go around unplugging things one at a time. You will find the source. TV's even when powered off, refrigerators, and microwaves, are common sources for this.

There are a couple of other electronic devises that would be plugged in, on and close to the receiver (computer, cameras, and older receivers).

I'll have to do as you said and go by process of elimination.

I'll also have a look into Radio Frequency Interference.

Thanks again for the suggestion.

Hi Cimpel, and welcome! This…

This is broadband noise, as produced by low-cost audio gear, especially when connected in a sub-optimal configuration. It is not mains hum (50/60Hz), which is a single-frequency tone (sometimes with harmonics), nor it it switching power-supply noise, which manifests itself as a buzzing sound, and is common in configurations using an ungrounded laptop computer.

In your case, the culprit is almost certainly the Xenix mixer, but the camera audio inputs could possibly also be contributing if their audio input level is too low. What I read from your post is that you are in effect using the Xenyx mixer as an attenuator to reduce the signal level from the StudioLive mixer so that it can be fed into the camera.

You have to tell us a little bit more about the setup, particularly:

(a) the model of the camera

If you are using, for example, the Tape Outputs (RCA connectors) on the StudioLive to feed the master audio to the camera, then all that may be needed is a simple stereo attenuator to achieve a signal level that the camera can accept.

Having said that, recording the output of a live sound mixer does not usually produce a good result, purely in terms of balance of the sound sources. This is because loud sounds from the stage (e.g from guitar amps) need low volumes in the PA, where quieter sounds from microphones need to be at a higher level in the PA because their acoustic output is lower. This results in "inverted" sonics in the mix if you simply record the master PA outputs. We had a recent thread on this, but I'm sorry I can't seem to find it with the help facility.

Thanks so much for your answer and additional questions Boswell.

Sorry I don't know how to directly reply to a comment. Nonetheless, I hope you see this.

a) Unfortunately, I cannot say with absolute certainty the model of the camera. I don’t work with it after initial setup and do not have it currently on hand. However, I’d say it is, or is something equal to, a Canon XA35 (see image). 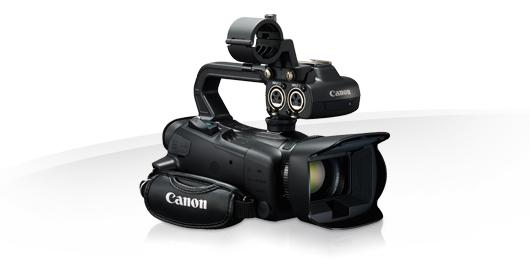 b) The signal feed to the camera is mono, to the Left XLR input.

c) The output from the StudioLive mixer, for sending to the camera, is the “Main Out” TRS Left.

d) On the Xenyx mixer I am using channel 1 “Line In” TRS for input. And the “Main Out” TRS Left, for output to the camera (see attached image for reference). 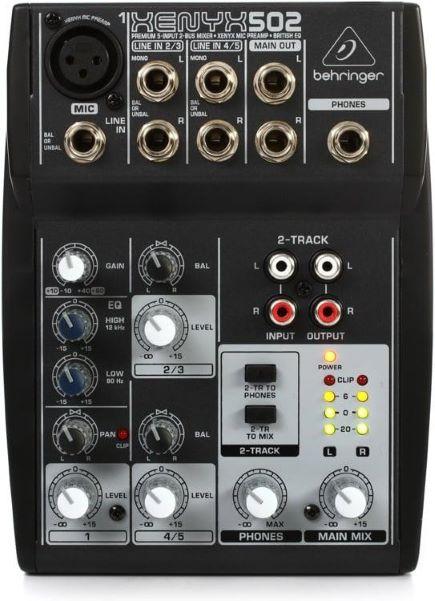 e) The StudioLive mixer’s outputs that are currently in use are Main Output XLR, Mono Output XLR, Aux Outputs, and Subgroup Outputs. The available ones would be Main Out TRS, Tape Out RCA, and maybe CR Outputs TRS. (I say "maybe" because I could not get them to work previously).

You would be absolutely correct in saying that I am using the Xenyx mixer as an attenuator.

Would it be better to use an actual attenuator straight to the camera? Or perhaps to troubleshoot and use the CR Outputs to camera?

P.S. I'm not too concerned about the sound levels from the multiple sources at this point in time (the issue of recording from a live mixer). The more important part to have recorded would have just one or a few vocal signals (it's a church, the recording is more for the speaking portions).

Thanks again for your response Boswell, and I really appreciate any additional assistance.

It looks as though the Radial Trim-Two passive DI box will do what you want. It takes a line level output (the StudioLive main output in this case), isolates the signal and reduces the level suitable for feeding an XLR microphone input. The important thing about this model is that it has a level control. so you would be able to adjust the level into the camera, similar to what you were trying to get the Xenix mixer to do. I'm certain the camera would also have its own level control for the XLR microphone inputs.

I know this model is a stereo DI box, but Radial does not appear to make a mono version. It's very likely you will be asked to make a stereo recording one day. Just use one channel for now.

You would need a standard XLR female to XLR male cable for taking the box output to the camera. For the input to the box, you would need either an XLR female to TRS plug cable, or you could use the RCA outputs of the StudioLive by using a stereo RCA to TS plug cable. Since the Trim-Two user guide says it has TRS input jacks, but is not explicit about whether it handles balanced input signals, the RCA lead might be preferable.

Yes, that one looks like it might just do the trick. Thank you Boswell. Your help is greatly appreciated.

Great! A couple of points I…

A couple of points I didn't mention earlier:

1) I'm assuming that the high level of audio broadband noise you are hearing is not coming from the wireless microphone receiver, since you explicitly said that the noise is not audible in the output from the StudioLive mixer (the PA mix). However, you may find that if you use a DI box to take the signal into the camera, you can still hear low-level noise, and by raising and lowering the fader on the relevant channel, you can attribute this to the wireless receiver. If this is the case, you will have to make some further decisions about whether to ignore it or do something about it. Shure microphone receivers generally are quite respectable in their noise performance, in marked contrast to many of the products from the manufacturer of the small mixer that you were using.

2) Further thought leads me to recommend use of the RCA outputs from the StudioLive to feed the RCA inputs of the Trim-Two DI box. Use of a dual RCA-RCA cable avoids the uncertainty of whether the DI box correctly accepts balanced signals on its 6.35mm jacks. I believe the SL's RCA outputs are simply an unbalanced version of the main outputs, but still at +18dBuFS level. This is too high for driving most domestic gear with RCA inputs, hence the need for a DI box.

Bos, you are amazing.

Bos, you are amazing.