I'm using a Behringer Mixer Xenyx 1222FX. I have to connect the Main Outputs of the mixer to the unbalanced line-in of a Dolby stereo amplifier which uses 2 RCA connectors. In order to make the correct wirings (balanced XLR -> unbalanced RCA), I have to know if the output stage of the mixer uses:
transformers,
active balanced output stages based on low-output-impedance amplifiers or
floating cross-coupled output stages.

Boswell Thu, 10/16/2008 - 00:27
They are electronic balanced, i.e. two separate op amp outputs carrying the phase and antiphase signals, so it would be OK to take just one output as an unbalanced signal.

However, I wouldn't bother wiring up an XLR cable specially. The RCA tape outputs carry the same signal, so just use those. Beware that the +22dBu FS level could well be too hot for your stereo amp and you may have to attenuate it.

Thanks!!! I'd prefere to connect the Main Out's (and not the Tap

Member Thu, 10/16/2008 - 19:25
Thanks!!!
I'd prefere to connect the Main Out's (and not the Tape out's) to be able to use the Graphic Equalizer of the mixer.
The RCA inputs of my Amplifier are specified as 50 KΩ 130mV ... 6.3V at Dolby level (85 dBC in the auditorium).
As the output stage of the Xenyx Mixer is not a transformer nor a cross-coupled stage, I have to use the configuration "4b" in the attached Rane Corporation's Note, is it ok?? 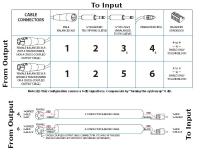 http://www.4shared.com/file/67256308/feecf2b0/Wirings.html
This configuration causes a loss of 4 dB.
Can I connect the mixer to the amp directly or have I to use a pad atenuator??
:D

I suggest you wire a pair of 4K7 resistors in series across pins 2 and 1 of each of the mixer XLR main L-R outputs and take the resistor junctions to the L and R inputs respectively of your amplifier. XLR pin 1 goes to RCA ground, via the cable shield. With a little care, you can fit the resistors inside the XLR connector.

Boswell, Can you walk me through your calculations? I'm not su

Or you could just keep the volume knob low.

GeckoMusic wrote: Boswell, Can you walk me through your calcula

Or you could just keep the volume knob low.

First of all, let's deal with the 50KΩ figure. If the output impedance of whatever resistive divider you use is less than on-tenth of this figure, you can ignore it, as it will have negligible effect on the attenuation. Since we are talking somewhere around 2-3KΩ Zout, ignore the 50KΩ.

Note we are dealing with r.m.s. levels here, which is where the confusion over peak or peak-peak values may have come in.

The FS balanced level from your mixer is +28dBu, so an unbalanced connection from that output would be +22dBu. That gives a minimum value of 4dB needed from the attenuator (22dBu down to 18dBu). It's easier on the brain cells to use equal value resistors in a simple voltage-divider configuration, hence my original recommendation of a pair of 4K7 resistors to give an attenuation of 6dB. Note that the output impedance is about 2.4K, justifying neglecting the 50K input impedance of the amplifier.

By the way, I'm searching for some info (possibly a schematics - but I think it's quite impossible) of my Dolby CP500 SR/D processor, in order to know if its input sensitivity (130mV ... 6.3V ) is a nominal or peak value.

A few milliseconds of searching turned this up: http://www.csst

If this information is correct for your amplifier, you will need to increase the attenuation, as 2.5V equates to +8dBV (approx+10dBu). That means you need at least 12dB. Use a 1K resistor to ground across the amplifier input and 3K in series with the mixer output.

I've chosen Non-Sync 1 which has the wider input range!